By employing clean architecture, you can design applications with very low coupling and independent of technical implementation details, such as databases and frameworks. That way, the application becomes easy to maintain and flexible to change. It also becomes intrinsically testable.

So here’s what we’re going to do in today’s post: 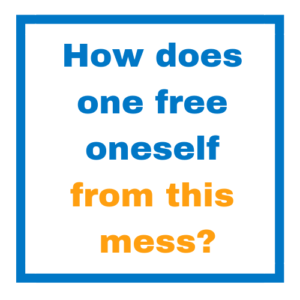 If you have at least a couple years of software development experience under your belt, then I can almost guarantee you’ve heard the term “separation of concerns.” It’s a principle that shows up quite often when talking about software architecture.

One of its incarnations is in the form of advice:

It’s very sound advice and I agree with it wholeheartedly, but the problem is that it’s not so easy or clear how to put it into practice, especially for beginners.

In practice, what ends up happening is that logic business frequently leaks to the application’s UI. And the same can go the other way around: it’s not so rare to find business logic code concerning itself with UI concepts, such as colors, markup languages, font sizes, and what have you.

And things can get even worse when you add data access to the mix. How does one free oneself from this mess?

The solution people often found for the mixing of concerns is to break up the application into layers, following an architectural pattern. There are generally three:

Nothing groundbreaking here, right? This stuff is pretty standard. You can bet there are no shortages of applications running around the world right now that follow an architecture like the one I’ve just described.

Maybe the names aren’t exactly the same or there are more (or maybe just two) layers, but the general principles still apply.

The Problems With the…Not So Clean Architecture

In order to see clean architecture’s benefits, we really need to understand the flaws in the current alternative. And for that, we need to talk about dependencies.

Quick question about the architecture described in the previous section: which layer depends on which? Well, it’s trivial to answer this if we organize the layers by using a diagram: 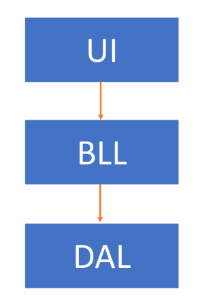 We can see that the presentation layer depends on (or references) the business logic layer, which is entirely reasonable. We wouldn’t want aesthetic tweaks to cause changes to our underlying business logic, right?

On the other hand, it’s perfectly acceptable that changes to the business rules cause changes in the UI.

At first sight, it doesn’t look like a problem. After all, you often have to persist changes in the database after some interaction with the user. It seems like the natural workflow:

Well, of course that’s pretty much what happens at execution time. What doesn’t follow is that the dependencies should flow in the same direction at compile time also. They shouldn’t. This will harm you. Let’s understand why.

The first problem is that you couple yourself to a specific database vendor. I already hear you saying how rare it is for this to happen in practice.

It happened to me on my first job after college. I had to adapt an application that up until then only ran on SQL Server and make it support Oracle Database also. ORMs were out of the question, for…reasons. It was a tough job, but it could’ve been easier if the application wasn’t so heavily coupled to SQL Server.

The next point is about testability.

It’s not uncommon to have data access code mixed up with code that performs calculations or other tasks that don’t rely on the database at all. You really wish you could test the logic of the code. But that would mean hitting the database, which would make the test not only slow but also harder to set up and less predictable.

Coupling to the database does not only harm automated testing. Even manual exploratory testing can suffer. As put by Alistair Cockburn:

“When the database server goes down or undergoes significant rework or replacement, the programmers can’t work because their work is tied to the presence of the database. This causes delay costs and often bad feelings between the people.”

Here he says “programmers,” but replace that with “testers” or “QA engineers” and the effect is pretty much the same.

This issue also applies to the UI layer. Sometimes you really wish you could test user interface, just for the sake of testing the presentation logic itself (e.g., when user clicks on radioButton, then the field x should be enabled) but without actually exercising the application logic.

This would allow, for instance, that two completely separate teams handle the UI and business logic development.

Clean Architecture to the Rescue

Now we know that the problem with the traditional approach, in short, is that it creates unnecessary coupling.

It couples the UI to the other layers; worse, it couples the domain (or business logic) layer to implementation details such as storage, which can have dire consequences for the testability of the application.

So, what’s the solution? Well, I’ve almost spelled it out in the previous paragraph: restore the domain to its rightful location, at the center of the architectural diagram.

Clean Architecture: A Bit of History

To the best of my knowledge, the first mention of clean architecture is from a blog post by Robert C. Martin, published back in 2011.

He then proceeded to write another, more famous post on the subject in the next year. In this newer post, Robert provides a more formal definition of clean architecture, complete with diagrams.

Right at the beginning, Robert explains that the architecture he’s proposing isn’t necessarily new. Actually, it’s an attempt to integrate and create a shared vocabulary about several architectural ideas that had appeared in the years prior, such as onion architecture and hexagonal architecture.

Since then, he’s written more posts and given talks on the subjects, and it started gaining momentum. Other developers were inspired enough to create their own sample projects and examples based on clean architecture.

So, a quick recap. Up until now we’ve seen

Finally, now it’s time to actually see what this whole clean architecture thing is about.

The common depiction of clean architecture is a diagram consisting of concentric circular layers, very reminiscent of the onion architecture, which is not a surprise. The idea here is that the inner layers are high-level, abstract policies; the outer layers are technical implementation details.

The proposed layers are

The aforementioned layer organization isn’t set in stone, though. There’s nothing really stopping you from using more than that if you need to.

What you really have to remember is to follow the dependency rule: all dependencies should point inwards.

Your Journey to a Clean and Safer Architecture Is Just Beginning

Today we’ve just touched the tip of the iceberg in regards to clean architecture.

There’s a lot more to know about it, of course. My intention with this post was to present what might be a novel idea, to excite your curiosity and leave you wanting more.

In the next posts, we’ll continue to explore the subject here on the NDepend blog. We’ll build a sample application in order to put these guidelines into practice. And we’ll test these ideas against the most realistic scenarios we can create in a blog post.

Want to learn more?  Here is the next post in our clean architecture series.