Hexagonal architecture is a model or pattern for designing software applications.

In this post, we’re going to take a look, in detail, at just how hexagonal architecture works.  But first, let’s talk about why this is desirable.

One major appeal of using hexagonal architecture is that it makes your code easier to test. You can swap in fakes for testing, which makes the tests more stable.

And this was the primary motivation for the creation of hexagonal architecture in the first place. There’s a bit of interesting trivia about its origins. The story goes a little like this…. 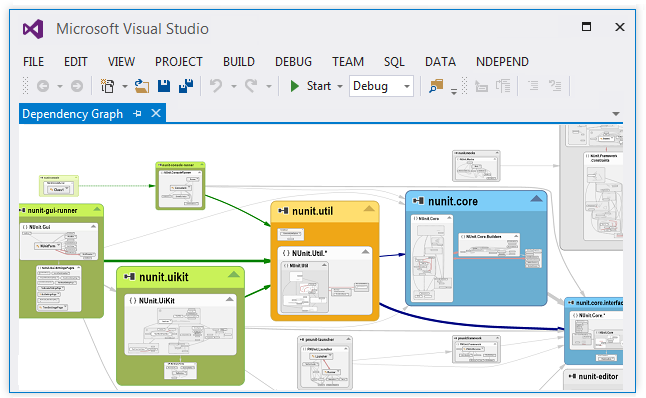 Interested in seeing what your codebase’s architecture looks like and whether it exists in the Zone of Pain?

Download the NDepend trial for free and see if your actual architecture matches your design documents. 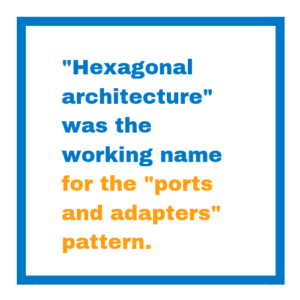 Alistair had his “eureka moment” about ports and adapters after reading Object Design: Roles, Responsibilities, and Collaborations by Rebecca Wirfs-Brock and Alan McKean. Alistair explains that the authors “call [the adapter] stereotype ‘Interfacers,’ but show examples of them using the GoF pattern ‘Adapter.'”

It’s important to note the use of the term “Interfacers” in that wiki entry because that’s really what it’s all about!

The layer between the core and the outer hexagon is the adapter layer. And each side of the hexagon represents the ports.

It’s not as if there are six—and only six—ports in the hexagonal architecture. The analogy kind of falls apart there.

The sides are simply representations in the model for ports. Alistair chose this flat-sided shape instead of a circle to convey a specific intent about ports.

Here’s my own interpretation of a hexagonal architecture diagram: 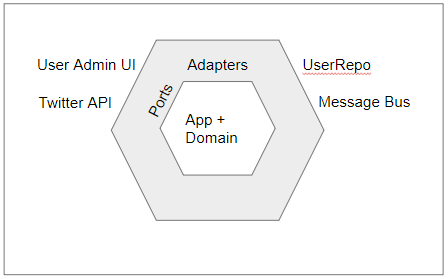 The model is balanced (Alistair has proclaimed his affinity for symmetry) with some external services on the left and others on the right.  Remember that hexagonal architecture is a model for how to structure certain aspects of the application. It’s specifically about dealing with I/O.

There are no specific requirements about the core, just that all of the business/application/domain logic lives there.

So what are ports anyway? In C#, they’re interfaces.

Thirteen years after Alistair’s idea, we commonly use the term “interface” without remembering how the world was without one.

But what is an interface really?

An interface defines how one module communicates with another.

Take two modules: “module A” and “module B.” 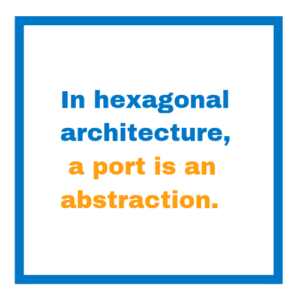 When module A needs to send a message to module B, it will do so through the interface. The interface is in the language of module A. (Let’s not worry too much about module B just yet; that’ll come later.)

Abstraction just means we don’t know how something does what it does. With an abstraction, we only know the high-level details.

For example, the instruction “Tell Johnny to meet me at the bank” is an abstraction. We don’t care how you tell Johnny so long as he gets the message.

If we wanted to be concrete about it, rather than abstract, we’d say “Call Johnny using the following procedure: Turn on your phone; tap the phone icon; now, tap the following numbers on the screen: 555-5555; tap send….” I won’t bore you with any more details.

So, we have this interface (as a port). Our module can use the interface to send messages. Now we need to make that message talk to something else. Enter the adapter.

Finally, the adapter is where we want to think about the concrete implementation. This is how the message is either handled or passed along. A message to “save the user record” might go to a database, a file, or a network call over HTTP. The adapter might even keep the message in memory. Anything goes so long as the adapter responds accordingly.

Here’s a concrete example using some C# code. Notice how the UserAdmin only knows about the interface.

In this example, the Save method uses the IUserRepo interface.

The UserAdmin class has no idea how the _userRepo does its thing. All our UserAdmin object knows about is the Save method on whatever the _userRepo references via the interface.

Let’s say the _userRepo represents module B in our earlier example. Module A is the UserAdmin class. Module A sends a message to module B via the IUserRepo interface. Here’s where our adapter comes in. The adapter is the implementing class of the IUserRepo. In our running application, this could write to a database, as in the following code:

Or, I could send the record over HTTP, as in this example:

Either way, module A behaves the same: It interacts with the repository without any details about what that repository does with the message. This is the power of the adapter!

Our UserDatabaseRepository and UserHttpRepository classes are the adapters. Each adapts the message to the underlying I/O. The adapters aren’t the database and the TCP port; rather, they adapt the message from the port to its destination(s).

But how does this help my code, you’re wondering, and what does it have to do with hexagonal architecture?

Module A can use the interface to send a message. It has no way of knowing who or what will actually receive the message. This is the biggest benefit of hexagonal architecture! 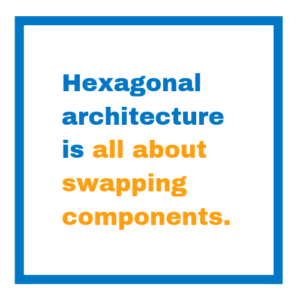 Hexagonal architecture is all about swapping components—specifically, external components. In the example above, the module host would inject the IUserRepo into the UserAdmin class. The host could be a web app, a console application, a test framework, or even another app. The point is to make the core independent of its inputs and outputs.

And About the Test Drive

I’ve already enumerated the advantages of using hexagonal architecture in your design. Now, let me clarify explicitly why you should use this pattern.

The bottom line is that you don’t need to rely on external factors to test your application.

Instead, just make the core of the system interact through ports. This way, your test framework will drive the application through those ports. You could even use files and scripts to drive it instead!

To give you a common scenario of how this works in practice, let’s say we’re using a .NET testing framework such as xUnit. The test runner, in this case, is the host.

The following four interactions between the tests and the application will happen via ports:

The tests and the test doubles (such as mocks, fakes, and stubs) drive the application through the ports. But what does that look like, you ask?

Let’s look at that UserRepo again in light of testing. It’s common to use a mock or fake during unit testing. A FakeUserRepo might look like this:

This is a fake because it stores the data in memory in the List. Notice that it implements IUserRepo. I also added a very rudimentary way to check the List.

Now we need to pass this FakeUserRepo adapter to the UserAdmin in our test code like this:

You can see that this test code is passing the FakeUserRepo into the UserAdmin class using its constructor.

In .NET-land, a web UI would interact with the UserAdmin class through an HTTP endpoint (the port) and ASP.NET Web API (the adapter). Web API routes and adapts the HTTP message to the controller.

Where it leaves you is to write the adapter code into the controller. That’s where you’d adapt the action and message to the appropriate application class—in this case, UserAdmin.

That’s All There Is to It!

Although hexagonal architecture seems like some vague mystical concept from the ages, it’s actually widespread in modern software development. The main theory behind it is decoupling the application logic from the inputs and outputs.

Phil Vuollet uses software to automate process to improve efficiency and repeatability. He writes about topics relevant to technology and business, occasionally gives talks on the same topics, and is a family man who enjoys playing soccer and board games with his children.