Span<T> primary goal is to avoid allocating new objects on the heap when one needs to work with a contiguous region of arbitrary memory. Performance gain is twofold:

The method uint.Parse(ReadOnlySpan<char>) shows that it’s not just about Span<T> itself: many .NET APIs related to string and other memory representations have been extended to accept Span<T> or ReadOnlySpan<T>.

Here is pseudo code and diagrams that summarizes both approaches: 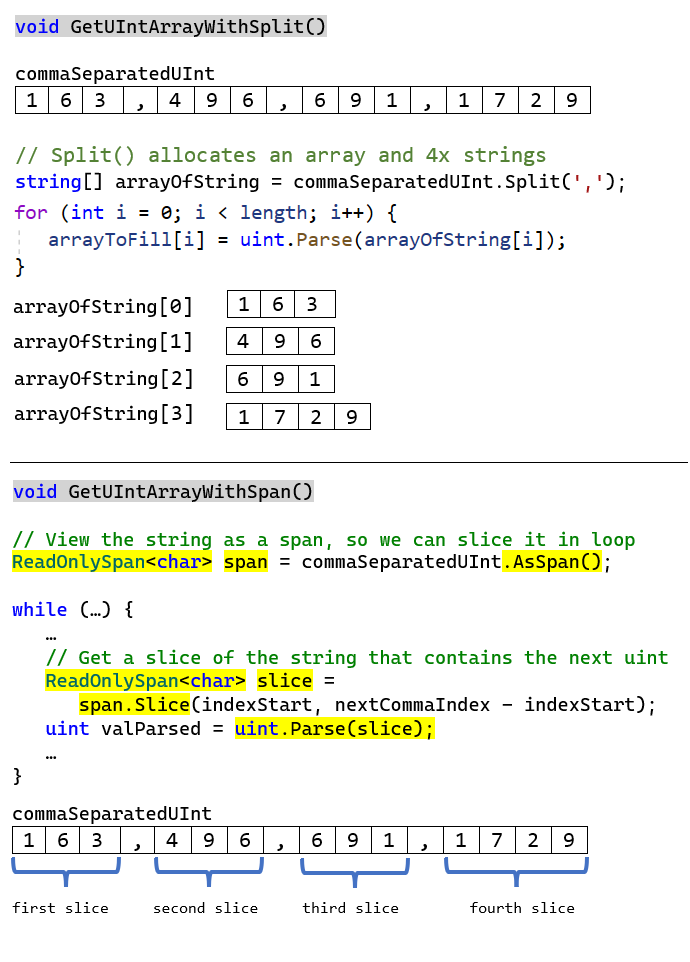 Below is the complete code that can be pasted in a C# 6 Program.cs source file. The NuGet package BenchmarkDotNet needs to be referenced. Here is the github project BenchmarkDotNet. Before digging into Benchmark.NET results, let’s note that:

For each cases, Benchmark.NET measures both memory allocation and durations. Here is how it presents the results:

Span<T> implementation is base on managed pointer!!

Most of Span<T> articles I read stop here. We now have a new cool way to avoid allocating sub-strings. But the key is that the super-performant implementation of Span<T> required heavy changes in the runtime. Let’s explain what happened.

The Span<T> source code (in .NET 7.0 and upper) shows that it contains two fields.

The _length value is internally multiplied by sizeof(T) to obtain the end address of the slice. Thus the slice in memory is the range [_reference, _reference + _length*sizeof(T)].

Managed pointer, ref struct ,ref field, extended usage of the keyword ref, is an interesting topic and I dedicated an entire article to it: Managed pointers, Span<T>, ref struct, C#11 ref fields and the scoped keyword

The struct Memory<T> is similar to Span<T> but without the ref struct restrictions. It can be used as a field of a class for example. As a consequence Memory<T> doesn’t have this special relation with the GC and is a bit less performant.  This performance loss is because its implementation has 3x fields instead of 2x: instead of having a special ByReference<T> pointer, Memory<T> needs to reference the _object and then the _index in the object.

I wanted to benchmark the comma separated string code above with Memory<T> but realized that there is no uint.Parse(Memory<T>) API which suggests Memory<T> didn’t get as much love as Span<T>.

Span<T> and the .NET Framework

Because Span<T> and ByReference<T> imply significant updates on the runtime GC, they were not ported to the .NET Framework. They are only available on the .NET Core runtime (.NET 5, .NET 6…) since version 2.1. Here are Microsoft engineers discussions about it: “Fast Span is too fundamental change to be quirklable in reasonable way.”.

However an implementation of Span<T>  exists for .NET Framework, it is referred as slow span. To use it the Nuget package System.Memory must be referenced. This implementation is similar to the Memory<T> implementation with 3x fields:

Also when referencing the System.Memory package from a .NET Framework project you won’t get APIs like uint.Parse(Span<T>) which makes it less attractive.

As we saw Span<T> is especially suitable to improve performance when working with string because it provides a way to manipulate sub-string without any allocation. However Span<T> is a generic type and can be used on any kind of element like byte. The complete Span<T> API including extension methods is huge because of all the methods overloaded. Here is a simplified API below:

Notice above the unsafe constructor that takes a void* pointer. Span can work on any kind of memory including unmanaged memory. It thus represents a simpler way to work with pointers and unmanaged memory.

However what makes Span<T>/ReadOnlySpan<T> shines is that more than 5.000 methods in the .NET API use it. This is shown by the screenshot below taken from NDepend analyzing the .NET 6 framework in the directory C:\Program Files\dotnet\shared\Microsoft.NETCore.App\6.0.2:

At this point one might wonder how Span<T> differs from array and especially ArraySegment<T>.

Span<T>/ReadOnlySpan<T> are special API that required heavy runtime modifications to offer improvements in very high performance critical scenarios. Not everyone needs its power but for those that needs it, it is a game changer.