For quite some years now, we (the NDepend team) got some demand about resolving Dependency Injection, see this page on our User Voices. Lately we’ve been considering such support carefully but came to the conclusion that it’d be awkward. On the other hand we have alway been prioritizing features development based on user feedback and need. So our conclusions are not definitive yet. I write this post to not only expose our point of view, but eventually trigger more productive discussions.

First let’s underline that NDepend is a static analyzer. It gathers 100% of its data from the code itself, and also parses more data like code coverage. Static analysis is in opposition with dynamic analysis that gathers data from runtime execution. 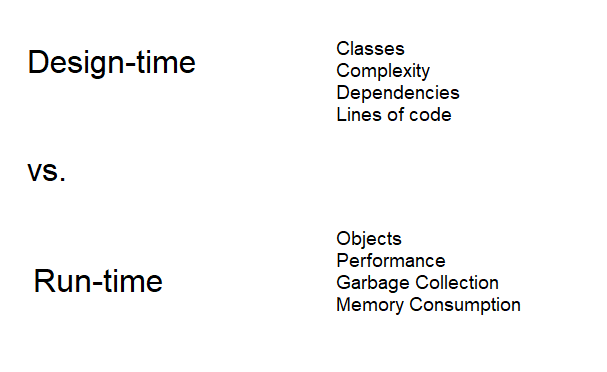 Recently I explained the basis of Dependency Injection (DI) and how it relates to DIP in the post SOLID Design: The Dependency Inversion Principle (DIP). DI is all about depending on interfaces instead of depending on classes. Here is simple DI sample code, ClientCode() depends on IDbConnection and not on SqlConnection. The power of DI is that now ClientCode() can run on other RDMS than SQL Server, like Oracle or SQLLite. ClientCode() can now also be unit-tested seamlessly by mocking the interface IDbConnection.

DI is an application of the Stable Dependency Principle (SDP), which is not part of the SOLID principles, but is much related with the Dependency Inversion Principle (DIP).

SDP states: The dependency should be in the direction of the stability. Stability is a measure of the likeliness of change. The more likely it will change, the less it is stable.

The Liskov Substitution Principle (LSP) and the Interface Segregation Principle (ISP) articles explain how interfaces must be carefully thought out. As a result an interface is a stable code element, that is less likely to change than the the classes that implement it. Following the SDP, it is better design to rely on interfaces than to rely on concrete classes.

In this context, users want NDepend to be able to parse DI code like that.

But why would this be useful? Here is a user feedback:

We have layered architecture: Foundation, Feature, Project. Following current NDepend report, everything follows right dependencies. Project depends on Feature and Foundation. Feature depends on Foundation. However due to some of DI registrations, we have complex dependencies (…) there is dependency from Foundation to Project in reality. Interface is declared in Foundation, but implementation is in Project and registered via DI. It means that Foundation projects, that are core and stable part of solution, depend on Project level, which is not so stable and reliable.

From this, one implies that not only at design time, but also at runtime dependencies should go from Project towards Foundation. In other words, one feels that implementing an adapter into Project and injecting it into a Foundation component “is not so stable and reliable”, but that’s not how those principles are meant and described.

As a matter of fact, being able to inject Project adapters into Foundation components (where the Project adapter implements one of Foundation’s interfaces) is the core of the Dependency Inversion Principle (DIP). Without it, it is impossible to create flexible systems. This can be unreliable, but only if one doesn’t follow the Liskov Substitution Principle (LSP), when Foundation interfaces are not well thought-out, like for example when ICollection<T> forces the Array class to implement ICollection<T>.Add() which obviously cannot be supported.

Moreover adding DI support would be a never-ending story—and I guess it cannot be done right without information collected at run-time. DI Containers are very complex beasts internally, their behavior often changes from one major version to the next, and there are dozens of DI Containers in .NET (Autofac, UnityContainer, NInject, StructureMap, MEF, SimpleInjector, Castle.Windsor, LightInject, Prism, Spring.net … just to name a few).

Again all our developments are driven by users-need, but on this particular need we’re not sure it’d make sense. We let the discussion open on this post and on the User Voices page. Whether you agree or disagree with our positions, feel free to comment.