After having covered the Open-Close Principle (OCP), the Liskov Substitution Principle (LSP), the Single Responsibility Principle (SRP) and the Interface Segregation Principle (ISP) let’s talk about the Dependency Inversion Principle (DIP) which is the D in the SOLID acronym. The DIP definition is:

The DIP has been introduced in the 90s by Robert C Martin. Here is the original article.

A Dependency is a Risk

As all SOLID principles DIP is about system maintainability and reusability. Inevitably some parts of the system will evolve and will be modified. We want a design that is resilient to changes. To avoid that a change breaks too much, we must:

The Liskov Substitution Principle (LSP) and the Interface Segregation Principle (ISP) articles explains that interfaces must be carefully thought out. Both principles are 2 faces of the same coin:

Efforts put in applying ISP and LSP result in interfaces stability. As a consequence these well-designed interfaces are less subject to changes than concrete classes that implement them.

Also having stable interfaces results in improved reusability. I am pretty confident that the interface IDisposable will never change. My classes can safely implement it and this interface is re-used all over the world.

In this context, the DIP states that depending on interfaces is less risky than depending on concrete implementations. DIP is about transforming this code:

The acronym DI is used for Dependency Injection and since it is almost the same as the DIP acronym this provokes confusion. The I is used for Inversion or Injection which might add up confusion. Hopefully DI and DIP are very much related.

DI means that some code, external to client code, configures which classes will be used at runtime by the client code. This is simple DI:

Many .NET DI frameworks exist to offer flexibility in binding classes behind interfaces. Those frameworks are based on reflection and thus, they offer some kind of magic. The syntax looks like:

And then comes what is called a Service Locator. The client can use the locator to create instances of the concrete type without knowing it. It is like invoking a constructor on an interface:

Thus while DIP is about maintainable and reusable design, DI is about flexible design. Both are very much related. Let’s notice that the flexibility obtained from DI is especially useful for testing purposes. Being DIP compliant improves the testability of the code:

DIP and Inversion of Control (IoC)

IoC is what differentiates a Framework from a Library. A library is typically a collection of functions and classes. On the other hands a framework also offers reusable classes but massively relies on callbacks. For example UI frameworks offers many callback points through graphical events:

The method m_ButtonOnClick() bound to the Button.OnClick event is a callback method. Instead of client code calling a framework method, the framework is responsible for calling back client code. This is an inversion in the control flow.

We can see that IoC is not related to DIP. However we can see Dependency Injection has a specialization of IoC:  DI is an IoC used specifically to manage dependencies.

DIP and the Level metric 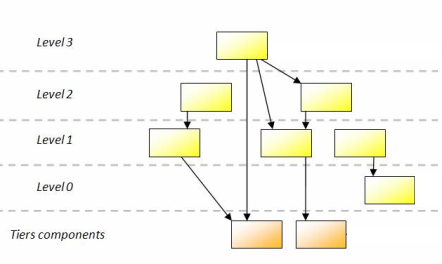 From this diagram we can infer that:

The Level metric can also be used to track classes with high Level values: it is a good indication that some interfaces must be introduced to break the long chain of concrete code calls: 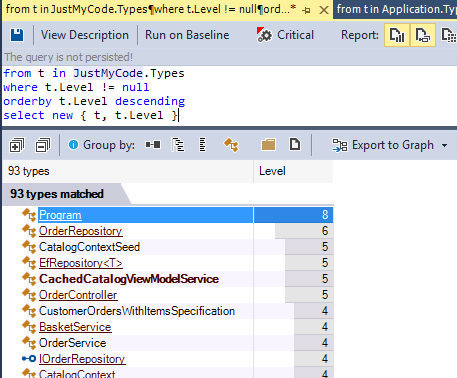 The class Program has a Level of 8 and if we look at the dependency graphs of types used from Program we can certainly see opportunities to introduce abstractions to be more DIP compliant: 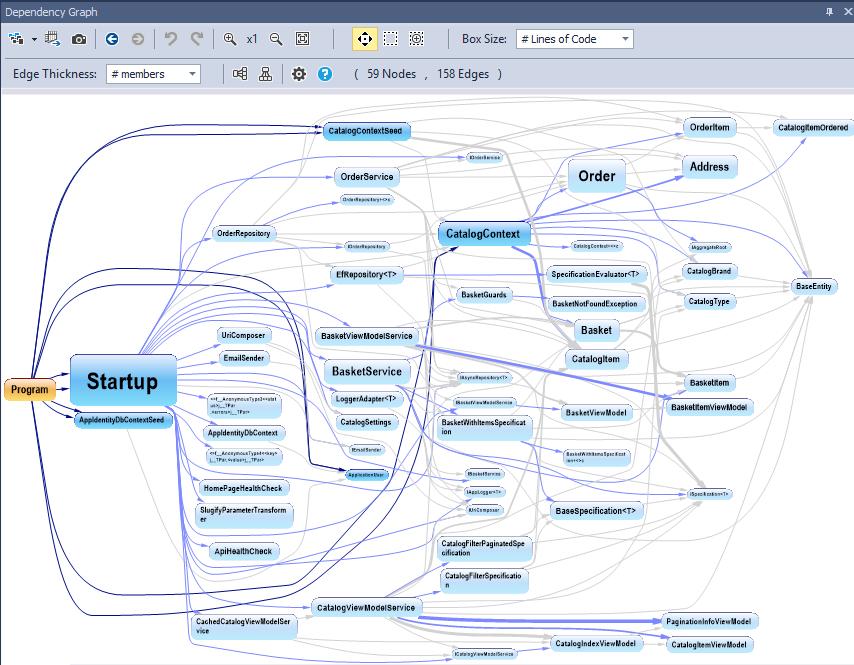 DIP and the Abstractness vs. Instability Graph

Robert C. Martin not only coined the DIP but also proposed some code metrics to measure the DIP compliance. See these metrics definitions here. From these metrics an intriguing Abstractness vs. Instability diagram can be plotted. Here we plotted the 3 assemblies of the OSS eShopOnWeb application. This diagram has been obtained from an NDepend report: 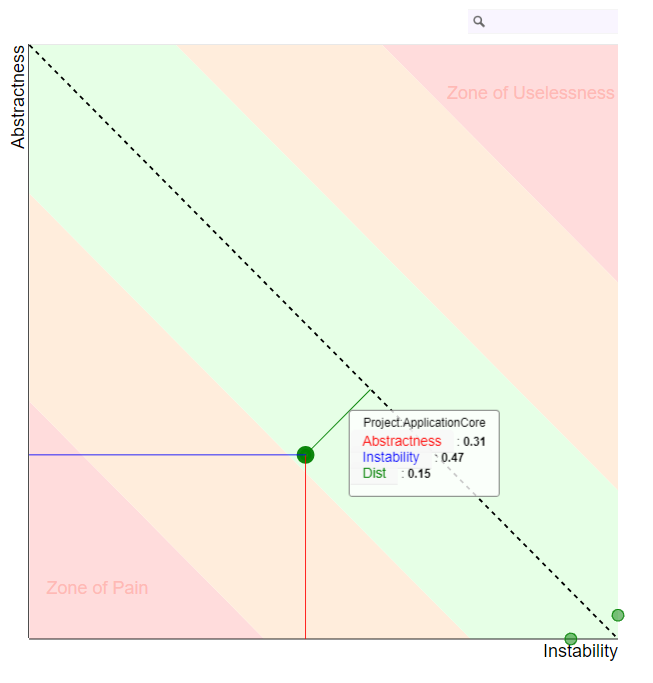 This diagram shows a balance between the two metrics and defines some green/orange/red zones:

As the Open-Close Principle (OCP), the Liskov Substitution Principle (LSP) and the Interface Segregation Principle (ISP) the DIP is a key principle to wisely harness the OOP abstraction and polymorphism concepts in order to improve the maintainability, the reusability and the testability of your code. No principle is an island (except maybe the Single Responsibility Principle (SRP)) and they must be applied hands-in-hands.

This article concludes this SOLID posts serie. Being aware of SOLID principles is not enough: they must be kept in mind during every design decision. But they also must be constrained by the KISS principle, Keep It Simple Stupid, because as we explained in the post Are SOLID principles Cargo Cult? it is easy to write entangled code in the name of SOLID principles. Then one can learn from experience. With years, identifying the right abstractions and partitioning properly the business needs in well balanced classes is becoming natural.