My last post about SOLID Design: The Single Responsibility Principle (SRP) generated some discussion on reddit. The discussion originated from a remark considering SOLID principles as a Cargo Cult. Taking account the definition of Cargo Cult the metaphor is a bit provocative but it is not unfounded. 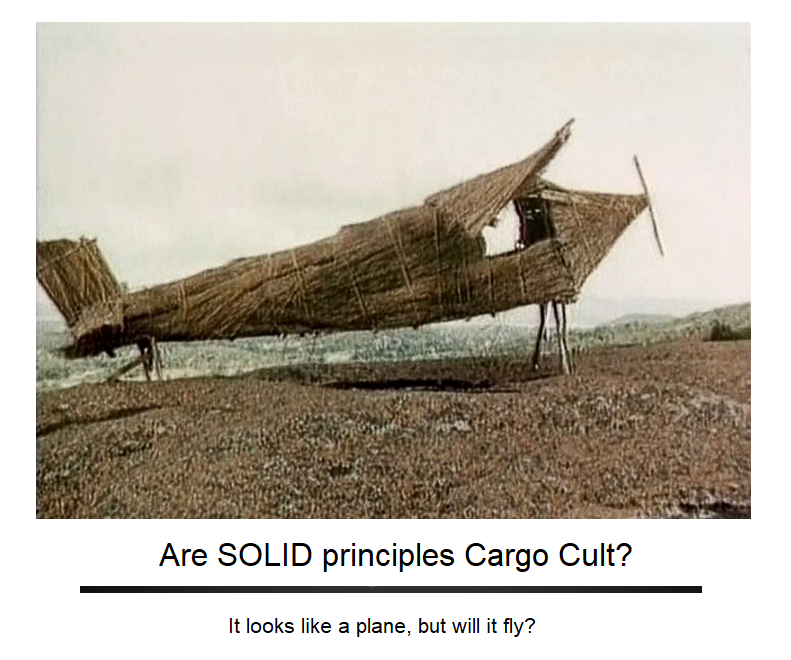 The recent Boeing’s 737 Max fiasco revealed that some parts of their software have been outsourced to $9-an-hour engineers. Those engineers shouldn’t be blamed for not achieving top notch software taking account the budget. Nevertheless it is clear that a lot of software written nowadays look like this cargo cult plane. For many real-world developers, SOLID principles are superstitious rituals whose primary goal is to succeed during job interview.

The SRP article underlines that SRP is the only SOLID principle not related to the usage of abstraction and polymorphism. SRP is about logic partitioning into code: which logic should be declared in which class. But SRP is so vague it is practically useless from its two definitions.

Definition 2: A class should have one reason to change.

One can justify any class design choice by tweaking somehow what is a responsibility or what is a reason to change. In other words, as someone wrote in comment: Most people who “practice” it don’t actually know what it means and use it as an excuse to do whatever the hell they were going to do anyways.

We can feel bitterness in those comments, certainly coming from seasoned developers whose job is to fix mistakes of $9 an hour engineers.

We must remember that SOLID principles emerged in the 80s and 90s from the work of world-class OOP experts like Robert C. Martin (Uncle Bob) and Bertrand Meyer. Software writing is often considered as an art. Terminologies such as clean code or beautiful code have been widely used. But art is a subjective activity. In this context, SOLID principles necessarily remain vague and subject to interpretation. And this is what makes the difference between a SOLID principle and an OOP pattern:

Despite a restraint number of keywords and operators, the OOP toolbelt of languages such as C# or Java is very rich. With a few dozens of characters it is possible to write code that puzzle experts. C# especially gets richer and richer with many syntactic sugars to express complex situations with just a few characters. This power is a double edged sword: seasoned developers can write neat and compact code. But on the other hand it is easy to misuse this power, especially for junior developers and all those that write code just to pay their bills.

Someone wrote in comments: “SOLID encourages abstraction, and abstraction increases complexity. It’s not always worth it, but it’s always presented as the non-plus ultra of good approaches.”

The only reason to be for abstraction in OOP is to simplify the implementation of a complex business rule.

This is why the Keep It Simple Stupid KISS principle should be always kept in mind: don’t add up extra implementation complexity on top of the business complexity.

I have been in the .NET static analysis industry since 2004. At that time I was consulting for large companies with massive legacy apps that were very costly to maintain. Books like Robert Martin’s Agile Principles, Patterns, and Practices made me realize that the source code is data. This data can be measured with code metrics. And the same way relational data can be crawled with SQL queries, code as data can be crawled with code queries. For example:

Not all aspects of SOLID principles can be objectively measured and verified. However static analysis can help bring objectiveness. For example:

Regularly applying such rules will avoid taking SOLID too far to the point it becomes detrimental. However there are still all those aspects of SOLID, and code design in general, that must be left to creativity and interpretation. Experience in software development helps a lot here: over the years one refines his/her gut feeling about which design will increase flexibility and maintainability.

Advice to add up objectivity when applying SOLID principles

Not everyone is a senior developer with a passion for well designed code. As a consequence Cargo Cult usage of SOLID principles is common. To improve the design some objectivity needs to be added in the development process. Here are my 3 advices for that: