With Visual Studio 2022 when you create a new console project based on .NET 6, the Hello World source code generated is now as simple as that:

Nice and concise isn’t it? Here is what running this program looks like:

In Visual Studio 2019, the Hello World source code proposed when creating a new console project used to be much more verbose with the definition of a namespace, a class and a Main() method.

(If you are already experienced with C# just skip this section)

If you are a beginner you might want to know that:

If you are already programming with C# for a while, let’s first decompile the assembly generated with IL Spy and realize that the compiled code is almost identical to the Visual Studio 2019 Hello World program shown in introduction.

Here are the new C# 9 and C# 10 features that makes possible one of the shortest Hello World source code in the industry:

With top-level statements, C# 9 takes care of generating a class named Program with a method named <Main>$() that is de-facto the entry point of the executable assembly.

The top-level statements feature is quite flexible. Here is what you can do with it:

Here is the decompiled assembly if you are curious (like me): 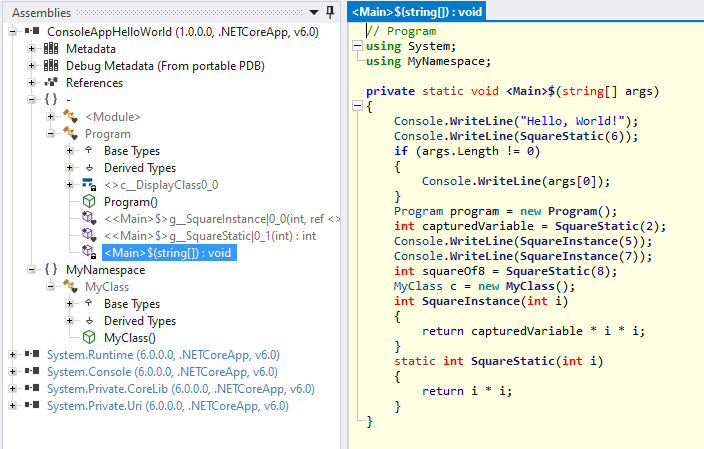 However there are a few limitations with C#9 top-level statements:

If we look in the C# .csproj project file generated, we can see the XML element <ImplicitUsings>enable</ImplicitUsings>. The value disable is also possible which is equivalent to removing this XML element.

When the element <ImplicitUsings> has the value enable, a file named YourProjectName.GlobalUsings.g.cs is added in .\obj\Debug\net6.0. This source file is auto-generated at compile-time and must not be edited, else changes are erased at next compilation. For the above Hello World console application the content of this generated file is:

We’ll detail the usage of the keyword global in the next section.

Notice that the set of namespaces implicitly imported depends on the kind of project. Those listed above are for a console project. But for an ASP.NET Core application some namespaces like Microsoft.AspNetCore.Http  or Microsoft.AspNetCore.Builder are implicitly imported in addition to the ones imported for a console project. When in doubt, just create a blank project of your choice and double check the generated GlobalUsings.g.cs file.

In the YourProjectName.GlobalUsings.g.cs content we saw the new C#10 syntax with the keyword global using. It means that the specified namespace is imported for all C# source files of the current project. There are two way to use this feature:

The global using directive only works at the project level. To make it work at the solution level, several strategies A) B) C) D) can be adopted:

Finally let’s notice that in this using clause below…

…global:: has noting to do with the global using feature. It’s here to avoid some collisions when several types or namespaces with a same name are declared in various scopes (full explanation here).

This article explained some new C# features that are here to reduce the size of your C# sources. A beginner doesn’t even need to know what a class or a method is to start writing a small working program. On the other hand, the feature implicit and global using directives are flexible enough to discard thousands of using clauses in any real-world application.