However static abstract members in interface opens the door to a whole new range of syntax possibility. One of this possibility is generic parsing through the new .NET 7.0 System.IParsable<TSelf> interface:

Thanks to this interface and its static abstract methods, it is now possible to have a generic extension method that parses a string to anything. Here is an example of such Parse<T>() method with a class Person implementing IParsable<Person> :

As the code sample above suggests, in .NET 7.0 IParsable<T> is implemented by all numeric types Int32, Byte, Double… but also by other types usually subject to parsing like DateTime, DateOnly or Guid.

One limitation of these new parsing APIs is that it assumes that the entire string is the value. You can easily provides your own parsing interfaces that take the start index as input and returns the number of char consumed. This way one can chain parsing operations on a string:

Alternatively .NET 7.0 provides the similar interface ISpanParsable<T> to parse from any ReadOnlySpan<Char> that typically represents a sub-string.

Just think about it: there were no easy way to implement generic parsing before .NET 7.0 and C# 11. One could have used Reflection as shown in the code ample below:

But this implementation is slower because of reflection cost. And one certainly doesn’t want a performance penalty each time a parsing occurs.

Even worst, the compile-time safety is not here to prevent calling Parse<T>() on a type T that has no Parse(string):T method.

Generic parsing is just an example of the Generic Factory Pattern made possible with C#11 static abstract. We can now have in our code base sweet interfaces like IParsebleFromJson or IParsebleFromXml that promote abstraction and re-use through generic algorithms.

But parsing is not the only use-case of generic factories. The code sample below proposes an extension method BuildVector<TNumeric>() that builds a vector from any array of numerics:

Actually the syntax interface IParsable<TSelf> where TSelf : IParsable<TSelf> is known in C++ as the Curiously Recurring Template Pattern (CRTP). This syntax allows an interface to declare methods with parameters or return type typed with the concrete type that implements the interface (like Parse(....) that returns a TSelf).

However there is no syntax to enforce that TSelf refers to the type that actually implements the interface. In the screenshot below we can see that class Person : IParsable<Employee> compiles and runs properly. This is why the new rule CA2260 emits a warning in this situation. 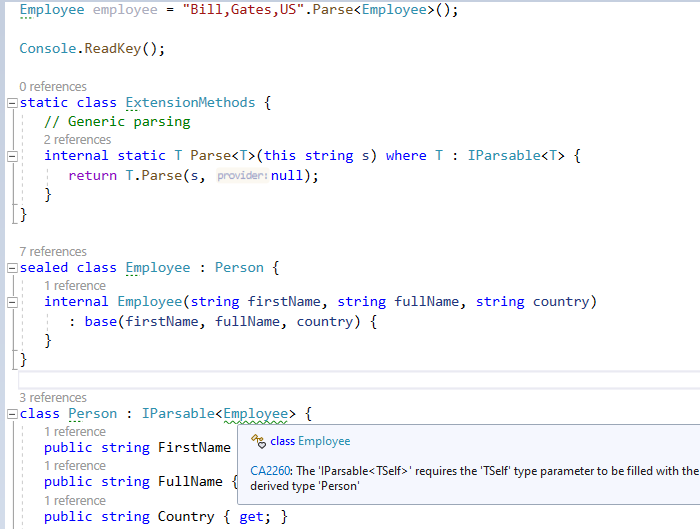 This new IParsable<TSelf> interface looks like a small new feature but it’s a tree that hides the forest of a new range of convenient syntaxes based on static abstraction.