One could think that developing an extension for a two-decades+ product as mature as Visual Studio is headache-less.

Not really. Visual Studio is a big big beast used by millions of professional developers daily. Versions after versions Microsoft is spending an astounding amount of effort to improve it and make sure it respects the latest standard in terms of dev platforms, IDE features, usability and performance.

This implies a lot of deep changes and all VS extensions must adapt to these changes … or die. Most of this adaptation efforts come from the support of new platforms (.NET Core, Xamarin, upcoming .NET 5…) but here I’d like to focus on VS integration recent changes.

On Monday 11th December 2017 all VS partners received an mail announcing VS package deferred loading, also referred to extension asynchronous initialization. In this mode VS extensions are loaded after VS startup and initialization. As a consequence VS startup is not slowed down by extensions.

Implementing this scenario required serious changes described here but this deferred loading scenario became mandatory only with VS 2019.1 (16.1) released this spring 2019, around 18 months later after the initial announcement. VS extension ISVs got plenty of time (and plenty of high quality support from Microsoft engineers) to implement and test this async loading scheme.

In February 2019, we were developing the support of NDepend for VS 2019 and were downloading the latest VS2019 preview, installed our NDepend extension and immediately noticed there were no more NDepend global menu? After investigation we saw our NDepend main menu, and other extensions menus, under a new Extensions menu –with no possibility to get back extensions menu in the main bar–.

This change impacts millions of extensions users and hundreds of partners ISVs but has never been announced publicly ahead nor debated. As an immediate consequence someone asked to get rid of this new Extensions menu and this generated a long list of complains.

I guess this major (and blunt) change was provoked initially by the VS2019 compact menu look, but I am not sure: even on a 1920 pixel wide monitor (DPI 100%) there is still plenty of width space to show extension menus.

Sometime in April 2019 someone anonymously published on the discussion the link to a new extension to put back extensions main menus in the main bar.

I guess the VS APIs used to achieve this magic are not well documented, hence we can wonder if this initiative comes from MS or not? At least now users can get back their extensions menus in the main bar. But the Extensions in Main Menus extension has been downloaded only 800 times in around 3 months. It means only a tiny subset of VS extension users are aware of it and are actually using it.

Personally I still have hope Microsoft will reconsider this move and will embed a similar option in a future VS version to let the users chose which features (out-of-the-box VS feature or extension feature) deserves a no-brainer/main bar access or not.

VS2019 Optimize rendering for screens with different pixel densities

We then discussed with VS engineers. They pointed us to this documentation and kindly offered quite a few custom advices: Per-Monitor Awareness support for Visual Studio extenders

Actually this change is pretty deep for (the tons of) WPF and Winforms controls rendered in the Visual studio UI. This took us time but we just released on July 3rd 2019 NDepend v2019.2.5 with full support for this Optimize rendering for screens with different pixel densities option. This required quite tricky fixes and we’d wish we have had a few months to adapt to this major breaking changes as we had for deferred loading explained above. As far as I know extensions ISVs were not informed in advance. On the other hand I’d like to underline the awesome support we got from Visual Studio engineers (as always actually) thanks again to all of them.

I noticed that Resharper pops up a dialog at VS2019 starting time (not sure if they got all fixed at the time of writing).

I also noticed that up to VS2019 16.1.3 there were still some bugs in the VS UI, see the Project Properties and Diagnostics Tool windows below. I just tried with 16.1.5 and it seems fixed.

My point is that this great improvement (Optimize rendering for screens with different pixel densities) should have been highlighted ahead during VS2019 preview time to avoid a wide range of UI bugs experienced by users during the early months of VS2019 RTM.

What can we expect next?

With .NET 5 public announcement on May 6th 2019 the .NET community now knows that sooner or later most of .NET Core or .NET Fx applications will have to be migrated to benefit from latest innovations and improvements.

Visual Studio 2019 is still running in a 32 bits process upon the .NET Fx 4 CLR with a massive WPF based UI and some COM usage. 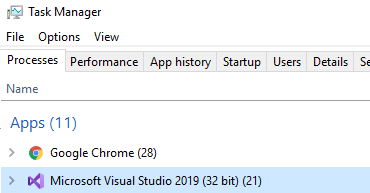 Only the future will tell but I hope extension VS ISVs will be advised ahead to anticipate the migration and continue to offer a seamless integration experience to users.