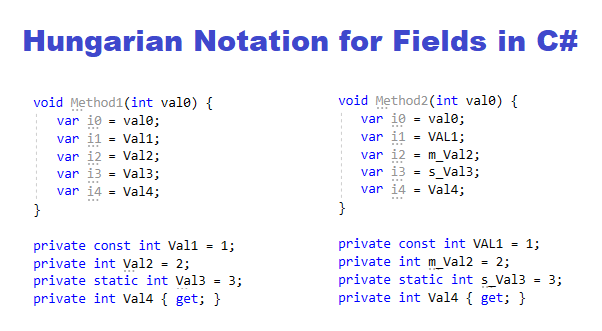 If there is one topic that divides the C# developers community, it is the Hungarian notation for fields. In our team we rely on Hungarian notation for fields, not just by habits but because we consider that it makes our C# code clearer. On the other hand the Microsoft Framework Guidelines advises: DO NOT use a prefix for field names and DO use PascalCasing in field names. However this guideline doesn’t apply to internal and private fields, only public and protected fields. If these guidelines were applied to internal and private fields, code would look like this. 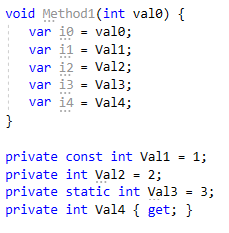 There are several motivations for not using fields Hungarian notation:

But should we be satisfied by the code above? Val1, Val2, Val13 and Val4 are fields with very different lifetimes and without prefixes we are forced to jump to their declarations to demystify.

Interestingly enough, the thousands of non-public static and instance fields in the .NET BCL (Base Class Library) implementation are prefixed with an underscore. Indeed, the BCL was written by C++ developers before there was a usable .NET. C# and the Framework Design Guidelines came after that. And in C++ such underscore prefix is more popular. 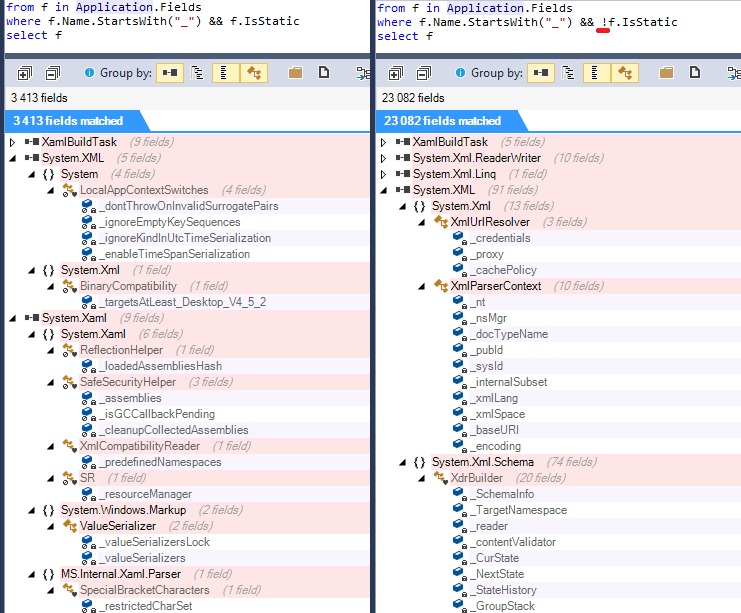 Clearly there are advantages with prefixing. Why are we all starting our interface names with I? Since the .NET inception this guideline is popular. It became widely applied because prefixing interfaces with I makes the code clearer: interfaces are the roots of good OOP design and being able to identify if a type is an interface or not at a glance makes the code more readable and more maintainable.

I remember that, when developing the NDepend Visual Studio extension, most of the EnvDTE types were interfaces whose names are not prefixed with an I. It was odd consuming these interfaces that don’t look like interfaces. But it turned to be annoying to mock them in tests. 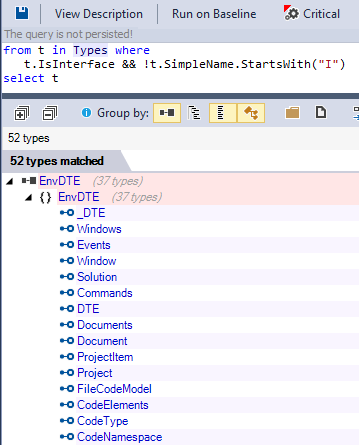 Being an instance or a static field matters

I noticed that often developers are not rigorous about the class and object terminology: many uses the term object to designate a class. Thus one might not consider that being a class field (static) or an object field (instance) is an important fact. But those fields lifetime details are essential to understand from the source code what happens at runtime. I recently wrote about the proper usages of the keyword ‘static’ in C# that explains that the keyword static should be reserved only for immutable state.

We use Hungarian notation for fields for the same reason why everyone is prefixing interfaces with I: to get clearer code. Certainly habits play a role in this choice, but objectively this version of the code below contain more information than the version in introduction. 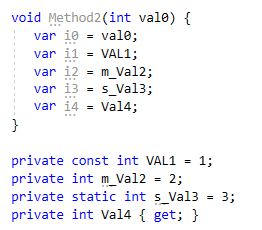 Another benefit of field Hungarian notation is that it makes such wrong call obj.m_State=3 obvious. A class should be responsible for its instances states and thus should encapsulate its fields by making them private. Note that this rule might not hold in high-performance environment like C# Unity because a property accessor represents necessarily a small performance hit. However most of the time it is worth encapsulating fields that are not suitable to be backed with the C# auto-implemented-property syntax int AutoProp { get; }.

Also prefixing fields leads to clear segregation between fields and methods when members of a class are listed alphabetically, both in the intellisense box…

…and in the wizard bar: 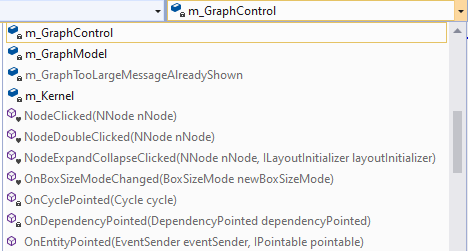 Text editor could easily use a color scheme or some icons to differentiate the usages of static and instance fields. The Visual Studio standard code element icons actually makes a difference with a small circle between instance and static fields:

But code is often read and edited within a raw text editor that don’t have support for icons. Moreover, unlike the small circle, the m_ and s_ prefixes intuitively convey the my/member vs. static point. Also those two prefixes are well-known enough: only complete beginners could thing that s_ would mean something like string or signed.

Many prefers to prefix fields names with an underscore. As we saw in the introduction most of the .NET Base Class Library private fields are prefixed with _.

Some suggests to prefix instance fields usages with this.. The benefit of m_ over this. is that it’s 60% shorter but more importantly, there is no way to accidentally forget about the prefix. Indeed when the this. prefix is used inconsistently it becomes worse than not using it at all since this creates confusion.

Despite all the benefits listed I’d say that your field naming conventions doesn’t matters so much as long as you’re consistent. Those are details that can make the code a bit more clearer. But these same details can also frustrate a bit some members in the team that look at Hungarian notation as something of the past.

To prevent inconsistency you can use a code validation tool: all such tools have some rule to enforce identifiers naming. Moreover a rule to enforce field prefixes is much easier to write and customize than a rule that would check that this. is used everywhere it should. With NDepend writing such rule with a C# LINQ query is as easy as:

Most of us are working on large legacies with hopefully existing guidelines that are hopefully enforced somehow. These guidelines are applied for a long time and it would be counter-productive to change them. But the next time you start a new project with the opportunity for new guidelines, maybe the Hungarian notation will help writing code that is a bit clearer!