Since the NDepend inception more than 15 years ago, we stuffed our code with calls to Debug.Assert(). This results today in more than 23.000 assertions calls.

Few developers realize that assertions in code are as important as assertions in tests. In both cases they prevent corrupted states at both smoke test-time and automatic test-time. Smoke testing means when you manually test your application. It is like smoke: your effort into testing manually is lost once done.

The scientific name for assertion in code is Design by Contract. Ok, contracts integrated in a language are more powerful than raw assertions, especially concerning inheritance, but the ideas are quite similar.

Our code was stuffed with 23.000 calls to Debug.Assert() and we wanted to improve that:

This task might appears daunting due to the large number of calls. However thanks to the feature Resharper > Find > Replace with Patterns feature, it took just half a day to complete. In this post I would like to highlight this powerful feature and our case-study. Hopefully you’ll adapt it to your own refactoring scenarios.

Defining our own assertion library

There are many open-sources assertions libraries. Here we’d like to stick with a basic NUnit-like approach. Hence it is not complicated to define a small library fully adapted to our needs like: 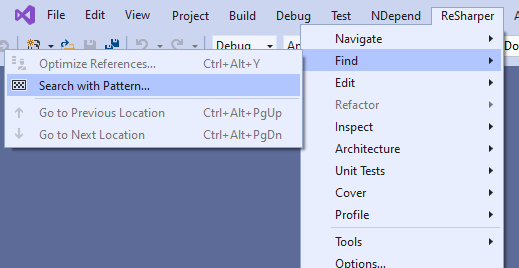 Below, for example, we choose the search pattern Debug.Assert($var1$ != null); and the replace pattern MyAssert.IsNotNull($var1$);. Note that you need to select the Replace button in the top-right corner of the dialog. Else you only get the search feature. 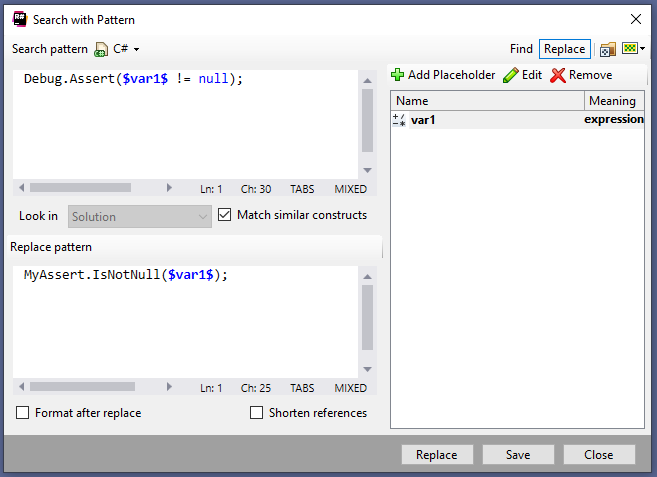 Then we can preview the 16.475 calls that will be refactored. We can eventually discard some calls thanks to the checkboxes. 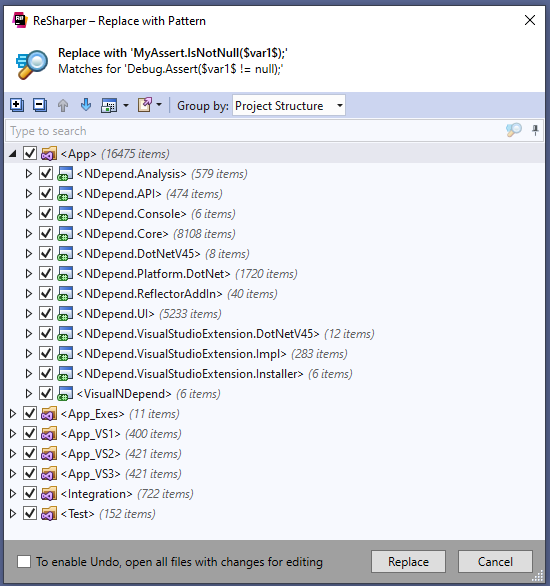 Refactoring expressions like Debug.Assert(obj1 == obj2) is not trivial. Indeed if the type of both objects is a reference type that overloads the equality/inequality operators refactoring such expression to MyAssert.ReferenceEquals(obj1,obj2) won’t work. You might think that it is a rare case but actually System.String compare strings by value! Hopefully we can match only expressions typed as string: 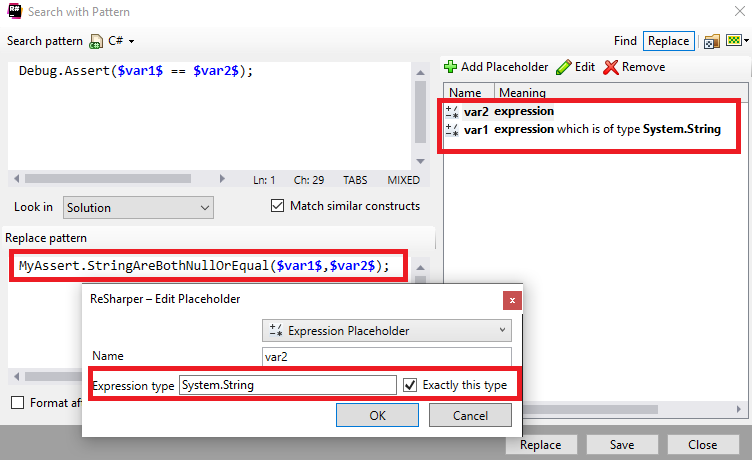 Other reference types overriding the equality and inequality operators like…

…can be found with this NDepend code query: 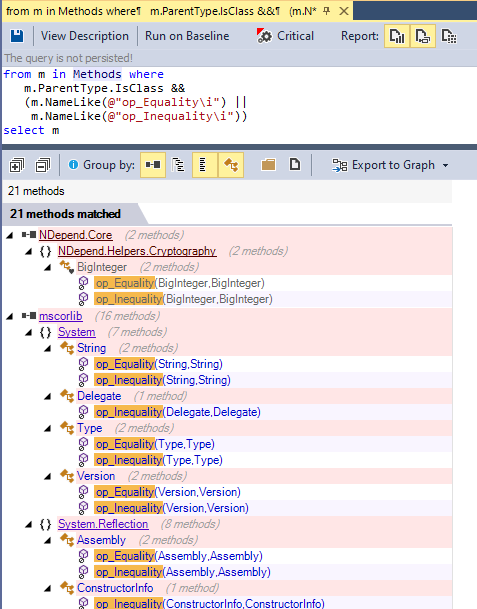 We don’t use equality operator overloading because it is wise to reserver this feature to types like BigInteger, Vector, Matrix… . Hopefully this query tells us to take care of BCL types like System.Version and System.Delegate. Of course now with C#9 records many classes will be compared by value. However we don’t record yet in our code.

As before, replacing to MyAssert.ReferenceEquals($var1$,$var2$) will emit some compiler errors when the underlying type is a value type. We don’t provide a MyAssert.ValueEquals(val1,val2) method. Here we refactor manually to MyAssert.IsTrue(val1 == val2) because value type comparison can be tricky. To illustrate this complexity, we allow comparing Debt value with TimeSpan value. This is because a technical-debt estimation is expressed in cost-to-fix which is measured by human-time.

From there we don’t need to detail other assertion refactoring because hopefully you now get a sense on how to use this feature on both trivial and non-trivial situations.

Thanks to the Resharper Structural Search and Replace feature, we’ve been able to refactor 23.000 calls within half a day. As explained there have been some edge cases and sometime we had to rely on compilation errors. But without this feature we would have had to write our own program (or analyzer) based on Roslyn.

In a 2020 post I explained the top 10 Visual Studio 2019 refactoring actions. I got many thankful feedback from developers that didn’t know that Visual Studio was catching up Resharper on the refactoring field. However this Structural Search & Replace feature could justify alone a Resharper license. This is the kind of feature for which one can regularly imagine use-cases. For example it also works on .aspx code and we used it a lot to refactor and improve substantially the technical SEO of our website.