Hurrah!! Last week we released NDepend v6 RTM. Once again we relied on a 2 months private beta-testing period and a one month Release Candidate period to do our best to release a polished and stable product.

I’d like to talk about our lines of defense to fix as many bugs as possible. Except a few pieces of software in the world that can afford mathematical demonstrations to prove they are bug-free (like plane and some medical ones), all other pieces of software, including NDepend, rely on an empirical approach to chasing bugs and fixing them. An empirical approach is an evidence based approach that relies on direct observations and experimentation in the acquisition of new knowledge. An empirical approach will never lead to a bug-free product, but it can help a lot in keeping the number of bugs low, and make it so that bugs happen in rare enough situations that won’t have any impact on most user’s experience.

I could write many blog posts about each line of defense, after more than a decade applying them there is so much to say, but I want this post to be synthetic.

A bug doesn’t necessarily lead to a crash, but a crash necessarily mean that there is a bug. Certainly the most important line of defense against bugs is to log all production crashes and relentlessly fix them all. The .NET Framework offers several unhandled exception access points, including:

In some environments like Visual Studio hosting, these access points don’t work and you’ll have to write code to catch all exceptions in all possible handlers of your program.

Of course some users are disconnected from internet, or behind a proxy, and you won’t get those production crashes. Our statistics show that this concerns only 20% of users at most. So being aware of 80% of all production crashes is certainly enough to have a good measure of what’s going wrong in a production. And because Windows and .NET are highly sophisticated technologies that are constantly evolving, you can expect plenty of issues that never occurred on your team’s machines! For example, the NDepend v6 Release Candidate Period shows us that users running NDepend v6 RC on a fresh Windows 8.1 or Windows 10 install, experienced crashes because of a P/Invoked win32 method that our code calls. Oddly enough this P/Invoked method behaves differently when .NET v3.5 is not installed on the machine!

The key to successful production crash logs, is to get as many useful data as possible per log. For example here is a production crash below we had a few week ago. When the same issue lead to several crash logs, we can start doing data mining on it. Do they all occur with the same stack trace? with the same high DPI resolution? on the same Windows platform version ? on the same machine only? Notice also the stack frames improved with IL offset retrieved with the StackFrame.GetILOffSet() method. Many times in the past, this alone lead us to the root cause. 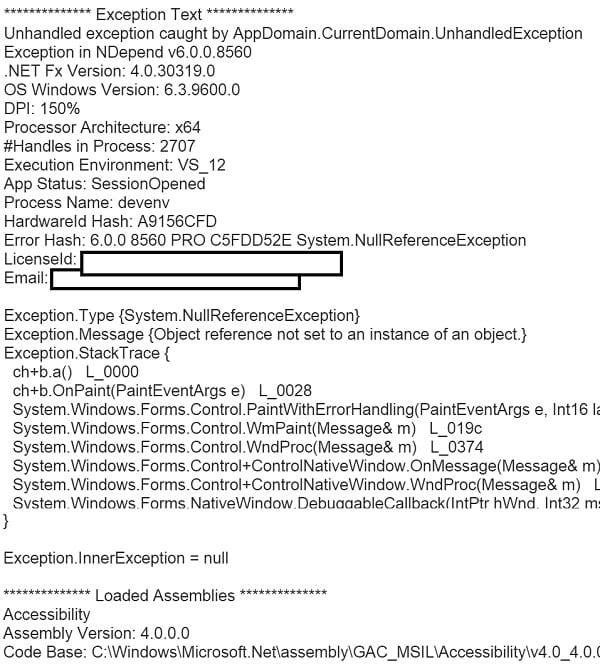 You’ll notice that we only log crashes, we don’t have other forms of runtime logs, like logging every major event that happen (button clicked, panel opened, analysis started…). Our experience with logging events is that ultimately we logged too much or not enough of them. In both cases, the information that could help fixi a particular issue is then lost or hard to find. We found out that having verbose crash logs was enough. Sometime we can ask a user a question, like which action did you do just before the crash, but in the vast majority of real-world cases, this information is implicitly contained in the stack trace. For the same reason we don’t use remote debugging nor Windows dump files. In our context, custom and verbose production crash logs are enough.

Not only are production crash logs an important line of defense, but they also demand just a few days of dedicated work to set up.

Having automatic tests is the second line of defense. Contrary to production crash log,s not only does it require a lot of work, but it even changes (forever) the way you write code. After a decade of writing automatic tests, a lot of conclusions can be made. In my attempt to remain synthetic in this post, let’s try to summarize the most relevant ones in a few points: 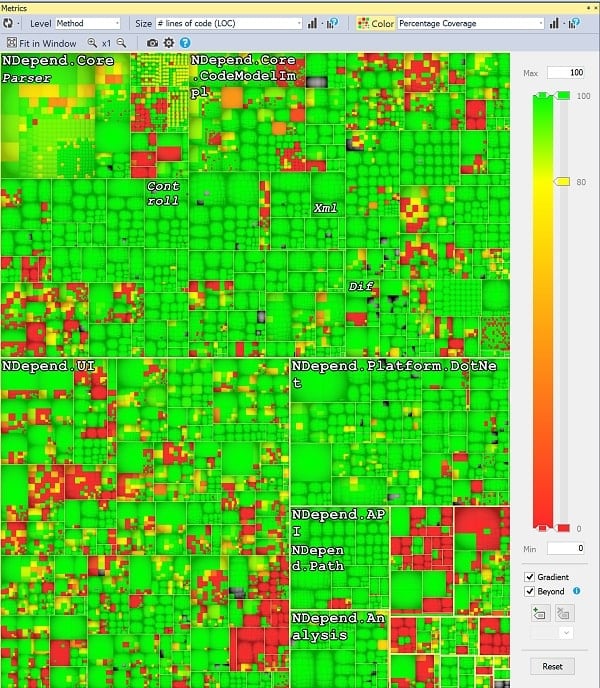 I see static analysis as unit tests, but instead of exercising the code dynamically, static analysis exercises properties that can be inferred from the code. In the previous section for example, I wrote that if a class was 100% covered by tests, it must remain 100% covered by tests.  And I even underlined that if a hole suddenly pops up in this perfect coverage, more often than not, understanding the root cause of the hole will lead to a bug fix. This illustrates how static analysis is actually a line of defense against bugs.

In the previous analogy between static analysis and unit-tests, a test is actually a code rule. NDepend makes it easy to write custom code rules, it is just a matter of writing a C# LINQ query based on a fluent API, for example:

Code rules involving code coverage and diff after setting a baseline are especially suited to hunt regression bugs. But static analysis can handle many other properties of the code and it is not only related to bugs but also to code maintainability.

The list of code properties that can be exercised by static analysis is endless. And the quoted ones refer to NDepend’s capabilities, some other tools like Resharper or CodeRush offer some other sorts of static analysis to warn about micro potential issues, like if a foreach variable is accessed from a closure for example, this can lead to major problems.

Static analysis is not only about directly finding bugs, but also about finding bug-prone situations that can decrease code understanding and maintainability.

Concerning code review, I don’t have much to say. This is static analysis except that the logic is statically checked by human instead of being checked by automatic rules. Thus it is highly imperfect and time consuming, yet we still practice it because experience shows that it helps finding issues that can hardly be found otherwise. The key to code review is to do it on bug-prone code, which include refactored code and new code that haven’t reached production yet.

No matter how good a team is at the previously explained lines of defense, if it fails at manual tests and beta testing, the end product will be buggy and ultimately unusable.

Because not all bugs lead to obvious crashes, tests done by humans are essential. For example, only a potential user can notice an incoherent numerical result in a UI.

Manual testing is like code review, highly imperfect and time consuming, and a team cannot capitalize on it. Yet, experience shows that it helps finding issue that can hardly be found otherwise.

We mentioned previously code contracts, they work hand in hand with manual tests. When, during a manual test session, I have the chance to break an assertion, this actually makes me happy 🙂 because I know that this is a great opportunity to fix a bug before it reaches the next release line.

Manual testing actually includes user feedback. Users are paying for a product and one main goal is to offer them a bug free product. Nevertheless, de-facto users are also testers and listening carefully to a user’s bug report and relentlessly struggling to fix them is an essential line of defense. Of course this does not only apply to bugs, but also to feature improvements, new feature suggestions, documentation gap, and much more, but these are another topics.