I’ve been enthusiast about 100% coverage for more than a decade. The large code base of NDepend we are working on will reach soon 90% overall coverage. Most classes tested are being 100% covered.

In the heatmap below small rectangles are methods. Grapes of rectangles are classes namespaces and assemblies. By importing code coverage in this heat-map we can see at a glance that most classes are green: they are 100% covered. This heatmap also shows in red and orange areas with room for improvements. Areas in gray represent untestable code tagged with System.Diagnostics.CodeAnalysis.ExcludeFromCodeCoverageAttribute.

Not everybody agrees with 100% coverage and the same points against used to popup again and again so I take a chance to address them one by one. 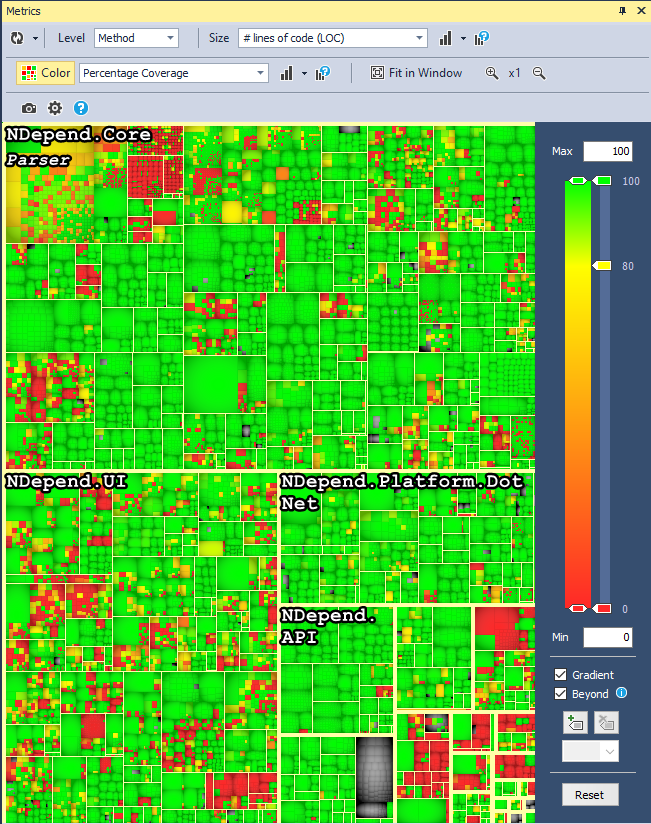 Often the example of trivial code proposed is property getter and setter. Indeed writing tests to cover such get/set methods doesn’t bring any value. But such trivial code is meant to be used by real code, isn’t it?

For example suppose we have a Contact class with a property like Contact.FirstName, this properties is meant to be used. The module that builds an invoice and that prints the contact name on it certainly uses it. And if the build invoice module is well tested, Contact.FirstName must get called implicitly at test time.

So if some trivial code is not covered by tests, the idea is not to write useless tests to cover it, the idea is to question yourself why the trivial code is not already implicitly covered by tests that exercise real code. And certainly you’ll find room for improvements in the tests suite in charge of testing the real code, that depends upon the trivial uncovered code. A future post will go through benefit of 100% coverage but as this point suggests, one key benefit is that a hole in 100% covered code is always an indicator of something interesting to improve.

On the other hand, in the real world we often end up with a component that contains a small portion that is hard to test. And we get satisfied with 90 or 95% coverage. But this is sweeping dust under the carpet: this small portion of code is not testable because it is not well designed and as a consequence it is bug-prone. Hence we end up not testing the most sensitive part of the code that likely concentrates most of the problems!

If after having wrote a test suite you end up with a few if/else blocks that are hard to test, do a favor to yourself: refactor to reach seamless full testability.

What matters is what gets asserted in tests, not the amount of coverage

This fictitious situation often proposed as 100% coverage counter argument doesn’t reflect the reality. In the real world if one works hard to get a complex class 100% covered, I cannot imagine that the tests don’t contain an healthy amount of assertions. No matter if TDD Test First Design approach is used or if tests get written at the same time as code tested : writing tests leads to think more and to think better. One doesn’t write a test without having a few points in mind to assert.

But there is more. Why only tests should contain assertions? The code itself is well suited to contain assertions. For more than a decade we stuff the NDepend code base with assertions. Everything that can be asserted gets asserted. We end up with more than 26K assertions. A good half of those comes from non-nullable references. C#8 nullable reference will relieve all those assertions. But will remain all other assertions about non-empty strings, special string formats, non-zero counter, IDictionary.ContainsKey(), non-zero denominator of a division, !object.IsDisposed, loop invariant…. And all those assertions are checked at test time and fail tests when violated. Ultimately most tests end up with a 1/10 ratio between the number of assertions in test checked, and the number of assertions in code checked.

We still rely on the good old System.Diagnostics.Debug.Assert() but this is an implementation detail. Any assertion library can be used from the code itself (including a custom one, or the Code.Contracts library that would have deserved more love). The only thing that matters is to tune assertions to fail a test upon violation, typically by sending an exception. A related topic is if those assertions must be checked or not at production time. This is another interesting debate with pros and cons.

Some code just cannot be tested

Indeed there are some API call that just cannot be tested like calls to System.Windows.MessageBox. Such calls need to be mocked. This way the code is well splitted between 100% covered code and code tagged with System.Diagnostics.CodeAnalysis.ExcludeFromCodeCoverageAttribute. Dependency Injection can be used to inject untestable implementation in tested code.

Again testability is a central characteristic of code. Partitioning code according to its testability makes sense.

However, there are situations where such untestable API tend to prolifer. Then your choice is to either mock everything or accept to live with non-tested code. But being in this situation is the sign that such API is immature because not test-prone. Thus something radical must be done about that: get rid of it, contribute to it (if OSS), fork it…

Since testing code has become a popular practice, UI code has always been treated as an awkward case: there are some frameworks dedicated to UI testing but such practice remains tedious and increases test maintenance. This is not satisfying.

As for any code, UI code must be written with testability in mind. UI code can contain UI logic but should not contain business logic. For example the UI class shouldn’t contain the implementation of a IsContactReadOnly() method (business logic) but can call such method declared in a non-UI testable class, to decide if a Contact First Name textbox should be readonly or editable (UI logic). Ideally UI code looks like an empty shell as much as possible.

Nowadays web development outperforms desktop developments. The backend spits HTML CSS and Javascript textual content. This content seen as data represents some easily testable material. However when possible, it is preferable to test the IsContactReadOnly() business logic directly from the backend code, than to test it indirectly, for example by checking if an HTML textbox is readonly or editable. Hopefully modern web platforms like ASP.NET Core propose testing strategies.

Desktop UI is a different beast to test and there is no magic. To test our UI specific code we’ve invested in an architecture where the UI code can be piloted, both from the main-form code and from tests. Such architecture relies massively on some mediator classes: any UI portion can pilot any other UI portion through these mediators. These mediators are used at production runtime, and tests supersede them to pilot the UI at testime. Tests dedicated to UI testing have few assertions, but such tests are not useless: they execute all the assertions stuffed in our UI code. At the end of the day some of our UI classes remain not fully covered but closed to. Small portions left untested doesn’t contain error-prone code but untestable UI peculiarities, like complex designer code or some DPI related code that can only be tested manually. The experience proved that this approach saved us from regression bugs many times.