Resharper is a great Visual Studio productivity extension but on the other hand it slows down significantly the IDE, especially when working with large solutions. However there are real hopes that soon  Resharper in VS will get faster, both because Visual Studio 2022 will run in a 64 bits process with (almost) unbounded memory, and because Jetbrains engineers are currently moving Resharper out-of-proc.

Since the introduction of the Microsoft Roslyn compiler in 2015, the Visual studio engineers made massive progresses in areas like code analysis, refactoring, navigation and searching. If you are not aware of these improvements you can read these two articles that illustrate them: Top 10 Visual Studio Refactoring Tips and 10 Visual Studio Navigation Productivity Tips. Hence one might disable Resharper periodically to check if he can live without it to get a slimmer and faster Visual Studio.

As a more than a decade Resharper user, a more than two decades Visual Studio user and a Visual Studio extension author, my opinion is necessarily biased. Nevertheless I feel that only a few improvements in Visual Studio could lead me to live without Resharper. Here are the three most prominent ones.

One thing that I love with Resharper is that when some code gets copy-pasted, the tool almost forces the user to accept importing the missing using clauses. The tool could import the using clauses itself but this would sound awkward and in some cases some choices have to be made if several types with the same name are declared in different namespaces. Thus this preemptive tooltip that reminds the (Alt+Enter) keyboard shortcut is the right balance IMHO.

On the other hand, when some code gets copy-pasted Visual Studio takes a second to underline the error with a squiggle. Then the user has to move the caret over the error and then press (Ctrl+dot), a well known keyboard shortcut for any seasoned Visual Studio user. This is less immediate than the Resharper way. Since copy-pasting is a common action, this missing feature is one of the tiny annoying thing that makes me goes to Visual studio > Option> Resharper > Resume Now.

If the identifier is declared in more than one namespace the user experience falls back to the Ctrl+dot one presented above: 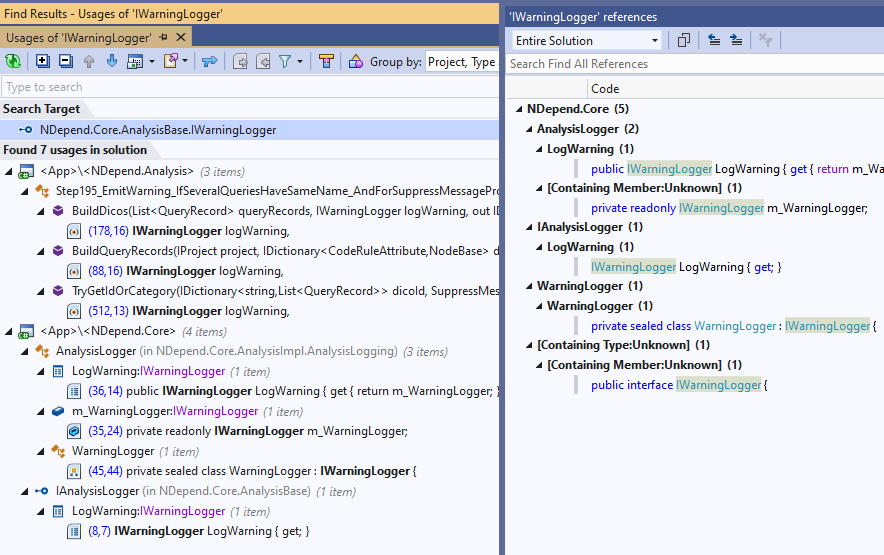 Most of information presented in the Resharper Find Results panel are essential to me. My developer eyes are exercised to read and make the most of this data quickly:

All those information are easily provided by the Roslyn model and it would be valuable that the Visual Studio team presents them, at least optionally.

Variable values displaying into the editor at Debugging time

Since 2017 Resharper is bringing debugger live data into the editor. Even though Visual Studio natively offers tons of great Debugging features, this one really helps. The Visual Studio debugger already knows about these values and positioning them properly in the source editor at debugging time shouldn’t be that complicated.

Btw with Seed: the screenshot above also demonstrates another great Resharper feature: argument name at calling site when it is not obvious. (Update: this feature exists in VS in experimental mode Tools > Options > Text Editor > C# or Basic > Advanced > Display inline parameter name hints (experimental) ).

On the other hand a few missing features massively contribute to my Resharper addiction because I use them very often. In my development flow it is not acceptable to miss those facilities. Interestingly enough those improvements would represent a tiny fraction of the effort made by the Visual Studio team in the productivity field.

This shows well the importance of usability and ergonomy. Here is the lesson: there are certainly many small usability potential improvements in our product and in your product that would make it more attractive. Let’s listen even more to user’ feedbacks to spot them!