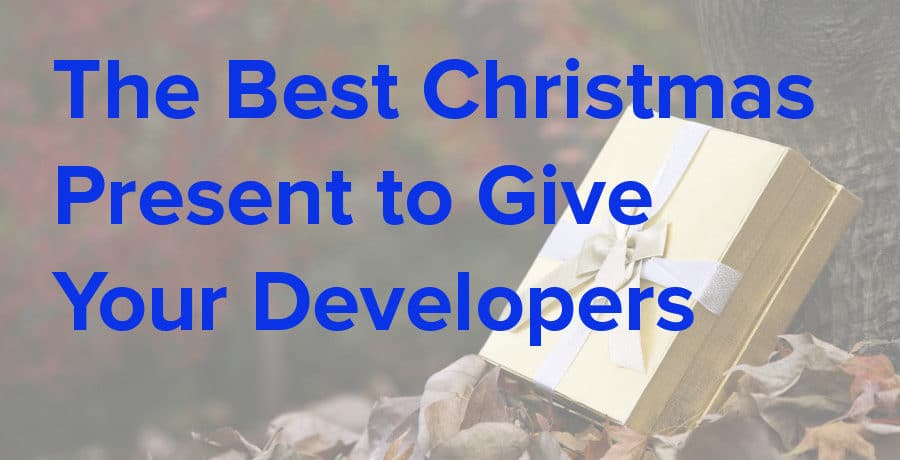 When Christmas time arrives, it comes with the need to buy gifts, eat too much food, and attend various gatherings.

All of that comes awkwardly together each year in the form of the company Christmas party.  Everyone heads to some local steakhouse for high end food, Bob from accounting having one too many, and some kind of gift exchange. If you’re a dev manager and yours is the sort of organization where managers present their direct reports with Christmas presents, you probably wonder what to get them.  Since you know they like techie things, should you get them a Raspberry Pi or something?  What if they don’t like Linux?  A drone, maybe?  One of those Alexa things?

Personally, I’d advise you to do something a little different this year.  Instead of a tchotchke or a gift card, give them the gift of trust.

Now, I know what you’re thinking.  Not only did I just propose something insanely hokey, but even if you wanted to do it, you can’t exactly put “trust” in a holiday print box and hand it out between speeches and dessert.

Obviously, I don’t mean to suggest that you should just say, “Merry Christmas, I trust you, and isn’t that really the greatest gift of all?”  Rather, you should give them a gift that demonstrates you trust them.  I’ll explore that a bit further in this post.

The Gift of Discretionary Spending

I promise you that the developers in your organization want things for which they don’t have a license.  Perhaps this means some kind of productivity add-in, like ReSharper or CodeRush.  Maybe it’s a static analysis tool like NDepend.  Whatever the case, they have something on their list that has never made it through official channels and onto the developer machine image.

In the vast majority of organizations, management tends to deny developers requests for such tooling outright.  Or, at the very least, they demand some sort of business case and subject the developers to an approval process.

You have the opportunity to give them the gift of not dealing with this – the gift of your trust and the organization’s trust.  Specifically, you can hand them a “certificate for $500 of spending on tooling” or some such thing.  The details don’t matter.  What matters is that you make clear to them that they have  a bucket of money to spend on whatever they feel will help them work more effectively.

Certainly, they’ll enjoy the new tools (toys).  And, as smart people, they’ll almost certainly pick things that make them more effective in earnest.  But the real win is the morale boost from the demonstration that you trust them with a budget to improve their work product, as they see fit.

The Gift of “Someday is Today”

Speaking of morale boosts, I’ll offer another similar trust gift.  I mean the gift of “you can do that thing you’ve wanted to, but not had time for.”

Let me explain by example.  You know that part of the codebase that the development team always gripes about?  That massive screen with all of the weird controls, designed by people no longer with the company?  The one whose global variables, ridiculous design, and incomprehensible code inspires fear and contempt in the team to the point where they borderline refuse to touch it?

Yeah, I’m guessing you know the one.  Anyway, think of how they talk about it.  Most likely, they talk about it in terms of hypothetical eventualities.  Someday, we’ll refactor that to use the builder pattern.  One of these days, we’ll clean that thing up and break it into 20 different classes.  That kind of thing.

Well, give them the gift of time to pay down this tech debt.  Signal to them that management understands their pain and frustration.  But more than that, signal to them that you believe them when they talk about ways to make the code more maintainable and feature development smoother.

All too often, the business folks assume that the developers have more concern with perfecting their masterpiece than with making the business money.  Give them the autonomy (in the form of some hours per week) to prove that wrong.

While others have similar policies, people most closely associate the “20% time” concept with Google.  For a period of time, Google allowed its employees to spend 20% of their time (a day per week), working on whatever they chose.

Their philosophy in doing so was, “we’ve hired smart people, so why not give them latitude to pursue what they think will be valuable to the company?”  I personally love this concept.  If you hire the sort of people that you feel will advance the company’s interests, why not allow them the freedom to do so?

Of the ideas I’ve mentioned so far, this one requires the most trust.  Absolutely no doubt about that.  And it is possible that you have some people who, given this trust, might tilt at windmills or even play video games.  You have to use your own judgment.  But if you trust your people, and if you respect their ability to find innovative automation solutions, this might be the best possible gift you can give them.

A Gift for Beyond the Holidays

So, to be perfectly I honest, I would offer this on top of what you normally get them.  Get them a Raspberry Pi or a gift card or a tablet or whatever.  But once you’ve ordered that gift in bulk for the team, think also of giving them the gift of your trust in the year to come.