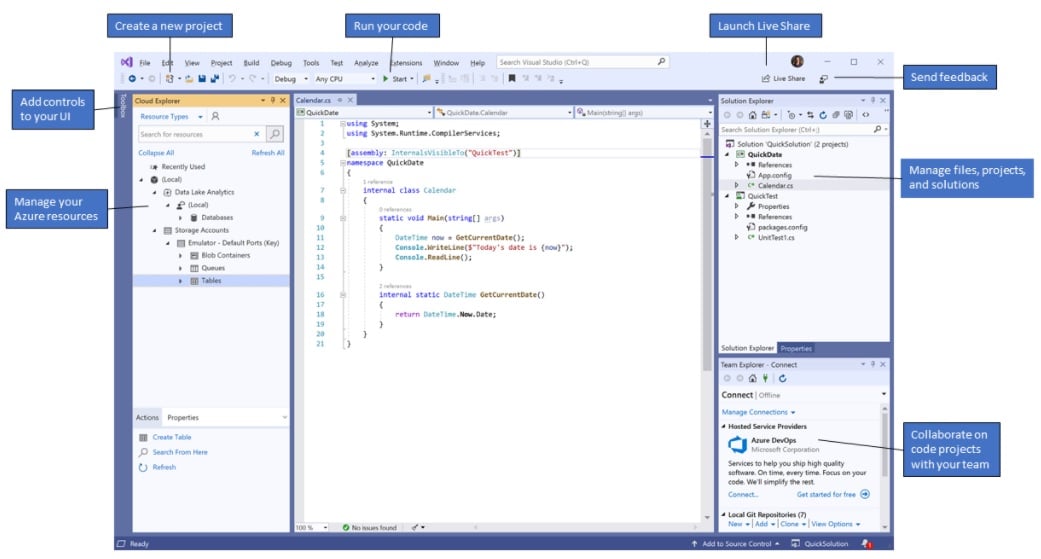 Themes can be fascinating. Humans are vulnerable to attachments. It could be anything – person, thing, color, food, etc. some people are attracted to unique colors that make them feel good. They believe that doing work and their projects in a particular environment would be the only working way. Visual effects are pleasing and satisfying at the same time.

But developers and programmers spend most of their time in their Visual Studio instances. Most developers love spending time with their computers or laptop, watching their projects going on with their favorite theme installed.

It is believed that the visual studio theme can be productive. Why? Because it is the reason for the developer’s contentment, and by doing this and other Visual Studio development productivity tips, maximum output is sure to achieve.

Customization of your Visual studio user interface includes some basic steps. You can simple change the default color theme to the Dark theme. 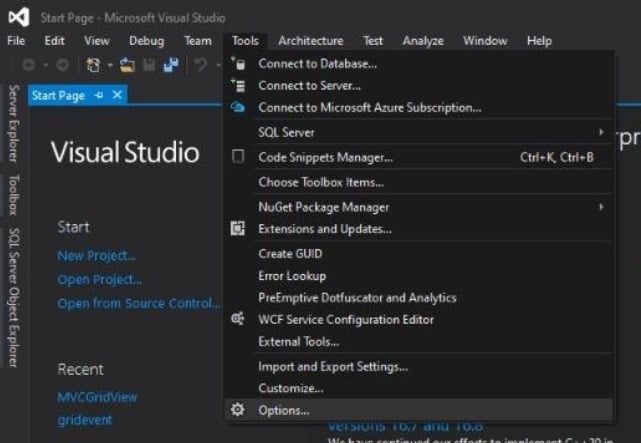 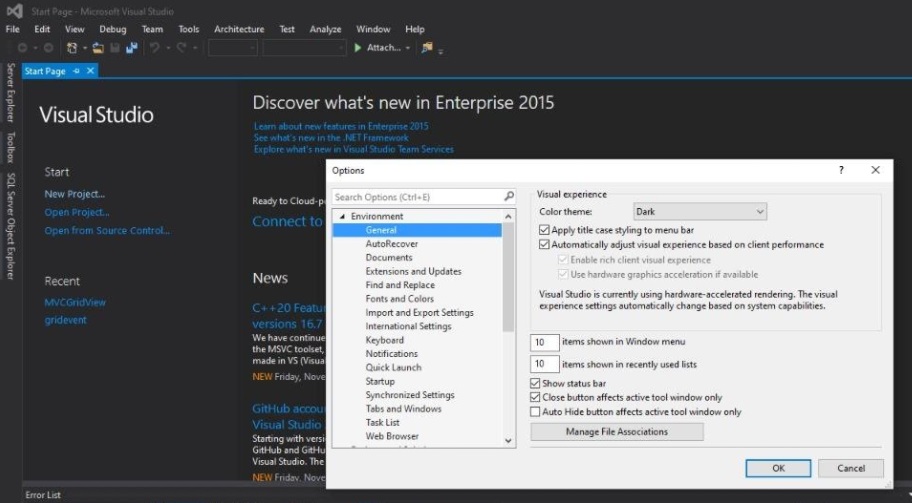 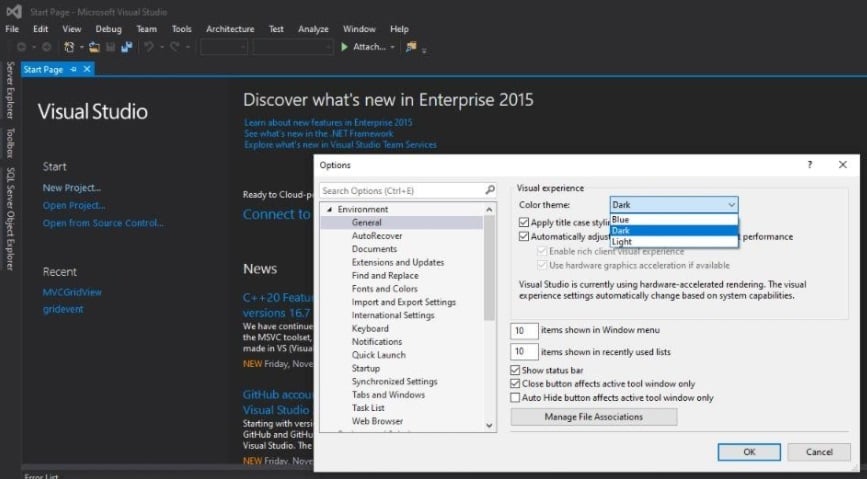 There are 3 basic themes. Dark, Light and Blue. See the screenshots below. 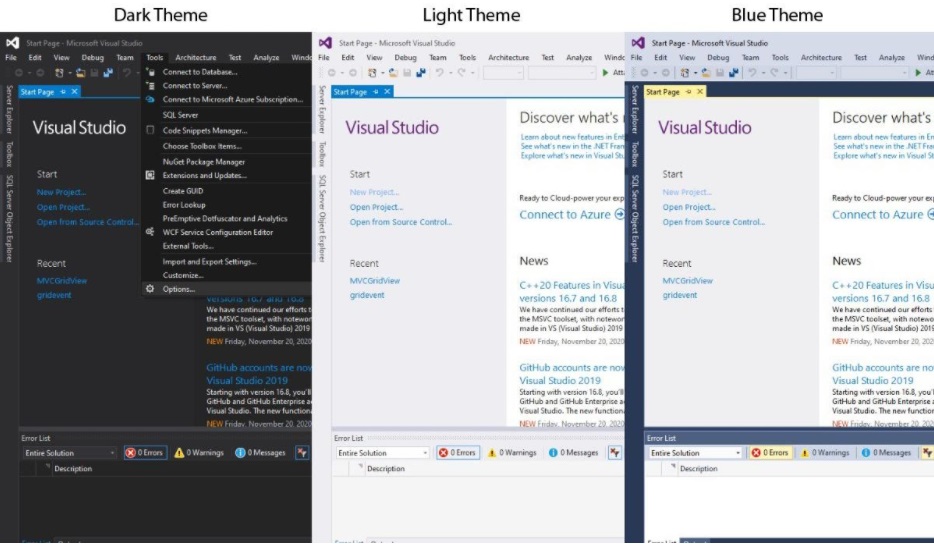 Apart from these 3 default themes, you can enjoy more themes just by adding this extension from the Visual Studio Marketplace. 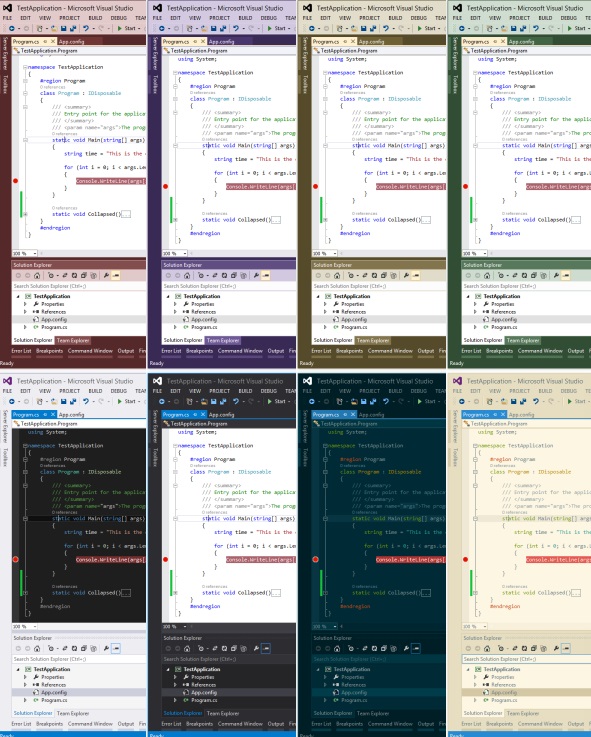 Also you can create your own themes using Visual Studio Color Theme Designer. 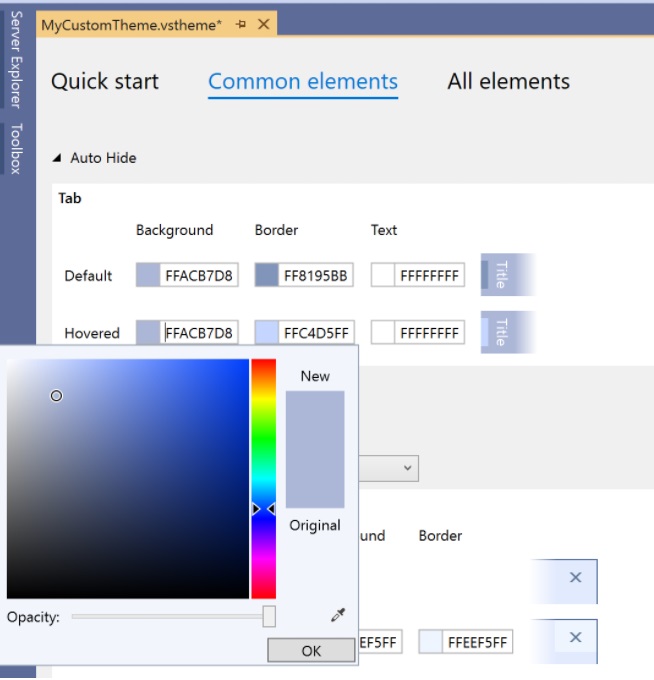 Visual Studio Theme for Productivity – How?

Productivity increases significantly as developers get the like-minded atmosphere and view. Visual Studio themes have been designed to cater and satisfy all the needs of developers. Here’s how!

‘Color is the power which directly influences the soul.’
(Wassily Kandinsky)

Color schemes influence character, mind, and productivity. The colors which make you feel active are energetic and must be implemented with the right files and layout of VS to get the maximum output of you.

There are plenty of different high rated Visual Studio Themes that are great to influence your character and, ultimately, positively improve your productivity.

With the help of color schemes, many developers can easily highlight and distribute the context according to their likeness and preferences.

Developers are humans, and they also want to work in an environment that is refreshing and soothing. Visual Studio themes that have juicy and elegant touch are sure to increase developer’s productivity.

The refreshing view of the overall screen is of great delight with great and attractive colors popping up on the screen. Coding is sure to become an adventurous ride for a developer with the touch of spark.

Not only the colors that are perfect for productivity but also the arrangement and precise alignment of the screen. The display certainly plays the part.

Files Hierarchy is the side tab that developers use to monitor the coding proceedings. It can also be understood as the side controller for monitoring and controlling the on-going process.

Humans have the problem of getting bored and then searching for new things to get amazed and attached with. Everyone wants to work in an environment or a workplace where things are arranged and customized according to their preferences.

It could be understood for developers as the application they are working on, or the development process they are carrying can be achieved within the time span and with excellent efficiency if they get the customized platform designed by them.

The background, color schemes, highlight bars, keyboard shortcuts, hierarchy tabs are everything goes as they liked it. The results are satisfactory and achievable. Customization gives you the liberty to do whatever style, design, or layout pleases you the most.

Visual Studio Themes are great with providing excessive and diverse tools that serve as a great shortcut for getting on the edge.

For experienced and even for beginner developers, shortcuts come in handy. They serve significantly in a matter that you haven’t even expected or thought of.

To go off the edge and want to speed up the codebase, use shortcuts with VS themes. For project and solution context menus, refractor, solution explorer, team, test, tool, view, window, azure, or team foundation context menus.

The centered layout is known as the distraction-free mode for developers. This view increases productivity by providing real intimacy with your code editor.

According to some developers, the centered layout is more like reading a PDF document. It helps you focus your view on one side, and you don’t have to move your eyeball here and there. With this stability in layout, developers seem to grow in productivity.

According to Free Essay Writers, themes play very important role when it comes to the work productivity. The color that hits your mind in a positive way, can help you think better and creatively.

Visual Studio themes are compelling and improve productivity. Most picked themes are in the dark mode as the dark mode is considered reducing eye strain even in the low light conditions. It also reduces screen glare, and with this, you flicker lower as more in light mode.