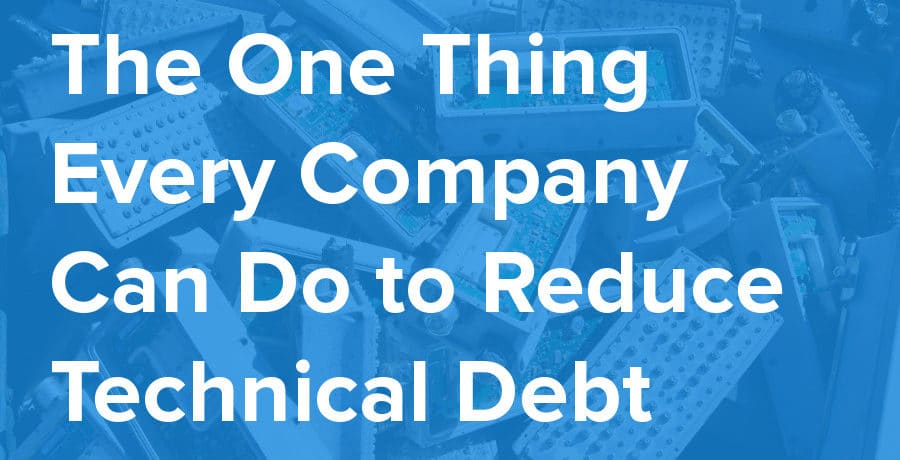 The idea of technical debt has become ubiquitous in our industry.  It started as a metaphor to help business stakeholders understand the compounding cost of shortcuts in the code.  Then, from there, it grew to define perhaps the foundation of trade-offs in the tech world.

You’d find yourself hard pressed, these days, to find a software shop that has never heard of tech debt.  It seems that just about everyone can talk in the abstract about dragons looming in their code, portending an eventual reckoning.  “We need to do something about our tech debt,” has become the rallying cry for “we’re running before we walk.”

As with its fiscal counterpart, when all other factors equal, having less tech debt is better than having more.  Technical debt creates drag on the pace of new feature deliver until someone ‘repays’ it.  And so shops constantly grapple with the question, “how can we reduce our tech debt?”

But today, I want to do something a bit different.  I want to talk about the one thing that every company can do to reduce tech debt.  I consider it to be sort of a step zero.

END_OF_DOCUMENT_TOKEN_TO_BE_REPLACED

Stop me if this sounds familiar.  (Well, not literally.  I realize that asynchronous publication makes it hard for you to actually stop me as I type.  Indulge me the figure of speech.)  You work on a codebase for a long time, all the while having the foreboding sense of growing messiness.  One day, perhaps when you have a bit of extra time, you download a static analyzer to tell you “how bad.”

Then you have an experience like a holiday-time binge eater getting on a scale on January 1st.  As the tool crunches its results, you wince in anticipation.  Next, you get the results, get depressed, and then get busy correcting them.  Unlike shedding those holiday pounds, you can often fix the most egregious errors in your codebase in a matter of days.  So you make those fixes, pat yourself on the back, and forget all about the static analyzer, perhaps letting your trial expire or leaving it to sit on the shelf.

If you’re wondering how I got in your head, consider that I see this pattern in client shops frequently.  They regard static analysis as a one time cleanup effort, to be implemented as a small project every now and then.  Then, they resolve to carry the learning forward to avoid making similar mistakes.  But, in a vacuum, they rarely do.
END_OF_DOCUMENT_TOKEN_TO_BE_REPLACED

If you’re familiar with NDepend, you’re probably familiar with the Visual Studio plugin, the out of the box metrics, the excellent visualization tools, and the iconic Zone of Uselessness/Zone of Pain chart.  These feel familiar to NDepend users and have likely found their way into the normal application development process. NDepend has other features as well, however, some of which I do not necessarily hear discussed as frequently.  The NDepend API has membership in that “lesser known NDepend features club.”  Yes, that’s right — if you didn’t know this, NDepend has an API that you can use.

You may be familiar, as a user, with the NDepend power tools.  These include some pretty powerful capabilities, such as duplicate code detection, so it stands to reason that you may have played with them or even that you might routinely use them.  But what you may not realize is the power tools’ source code accompanies the installation of NDepend, and it furnishes a great series of examples on how to use the NDepend API.

NDepend’s API is contained in the DLLs that support the executable and plugin, so you needn’t do anything special to obtain it.  The NDepend website also treats the API as a first class citizen, providing detailed, excellent documentation.   With your NDepend installation, you can get up and running quickly with the API.

Probably the easiest way to introduce yourself is to open the source code for the power tools project and to add a power tool, or generally to modify that assembly.  If you want to create your own assembly to use the power tools, you can do that as well, though it is a bit more involved.  The purpose of this post is not to do a walk-through of setting up with the power tools, since that can be found here.  I will mention two things, however, that are worth bearing in mind as you get started.

I’ve spoken so far in generalities about the API.  If you haven’t already used it, you might be wondering what kinds of applications it has, besides simply being interesting to play with.  Fair enough.

One interesting use case that I’ve experienced personally is getting information out of NDepend in a customized format.  For example, let’s say I’m analyzing a client’s codebase and want to cite statistical information about types and methods in the code.  Out of the box, what I do is open Visual Studio and then open NDepend’s query/rules editor.  This gives me the ability to create ad-hoc CQLinq queries that will have the information I need.

But from there, I have to transcribe the results into a format that I want, such as a spreadsheet.  That’s fine for small projects or sample sizes, but it becomes unwieldy if I want to plot statistics in large codebases.  To address this, I have enlisted the NDepend API.

END_OF_DOCUMENT_TOKEN_TO_BE_REPLACED

I’ve made no secret of, and even frequently referred to my consulting practice including aspects of IT management consulting.  In short, one of my key offerings is to help strategic decision makers (CIOs/CTOs, dev managers, etc) make tough or non-obvious calls about their applications and codebases.  Can we migrate this easily to a new technology, or should we start over?  Are we heading in the right direction with the new code that we’re writing?  We’d like to start getting our codebase under test, but we’re not sure how (un) testable the code is – can you, as an IT consultant, advise?

This is a fairly niche position that’s fairly high on the organizational trust ladder, so it’s good work to be had.  Because of that, I recently got a question along the lines of, “how do you get that sort of work and then succeed with it?”  In thinking about the answer, I realized it would make a good blog post, specifically for the NDepend blog.  I think of this work as true consulting, and NDepend is invaluable to me as I do it.

Before I tell you about how this works for me in detail, let me paint a picture of what I think of as a market differentiator for my specific services.  I’ll do this by offering a tale of two different consulting pitfalls that people seem to fall into if tasked with the sorts of high-trust, advisory consulting engagements.