Programming languages come in all shapes and sizes: interpreted vs. compiled, weak vs. strong typing, low-level vs. high-level, terse vs. expressive… There are many buckets you can put a programming language into, even though not all are equally meaningful.

One very common way people classify languages is to organize them into paradigms. You can think of a paradigm as a group of languages that share similar characteristics. There are many paradigms currently in use: procedural, functional, and object-oriented. Many of these terms are often misused or confused; there’s also some degree of overlap between different paradigms, which definitely doesn’t make things easier.

Add all of that together and what you get is a landscape that’s not too easy for a beginner to grasp.  In today’s post, we’ll try and fix this situation by giving you a clear picture of the imperative programming paradigm.

END_OF_DOCUMENT_TOKEN_TO_BE_REPLACED

The problem was solved easily because just one default rule consumed our Append() extension method, we just had to refactor this method to use it as a static method call instead of an extension method call:  ExtensionMethodsEnumerable.Append(...)

Unfortunately with the recent release of .NET Framework 4.7.2, the same problem just happened again, this time with this extension method:

This time 22 default code rules are relying on our ToHashSet() extension method. This method is used widely because it is often the cornerstone to improve significantly performances. But this means that after installing the .NET Fx v4.7.2, 22 default rules will break.

This time the problem is not solved easily by calling our ExtensionMethodsSet.ToHashSet<TSource>(this IEnumerable<TSource>)  extension method as a static method because in most of these 22 rules source code, changing the extension method call into a static method call require a few brain cycle. Moreover it makes the rules source code less readable: For example the first needs to be transformed into the second:

We wanted a straightforward and clean way for NDepend users to solve this issue on all their default-or-custom code rules.  The solution is the new extension method ToHashSetEx().

Solving the issue on an existing NDepend deployment is now as simple as replacing .ToHashSet()  with  .ToHashSetEx()  in all textual files that contain the user code rules and code queries (the files with extension .ndproj and .ndrules).

We just released NDepend v2018.1.1 with this new extension method  ExtensionMethodsSet.ToHashSetEx<TSource>(this IEnumerable<TSource>). Of course all default rules and generated queries now rely on ToHashSetEx() and also a smart error message is now shown to the user in such situation:

We hesitated between ToHashSetEx() and ToHashSet2() but we are confident that this problem won’t scale (more explanation on suffixing a class or method name with Ex here).

Actually we could have detected this particular problem earlier in October 2017 because Microsoft claimed that the .NET Fx will ultimately support .NET Standard 2.0 and  .NET Standard 2.0 already presented this ToHashSet() extension method. So this time we analyzed both C:\WINDOWS\Microsoft.NET\Framework\v4.0.30319\netstandard.dll and NDepend.API.dll to double-check with this code query that there is no more risk of extension method collision:

We find back both Append() and ToHashSet() collisions and since NDepend.API is not concerned with queryable, there is no more risk of collision: 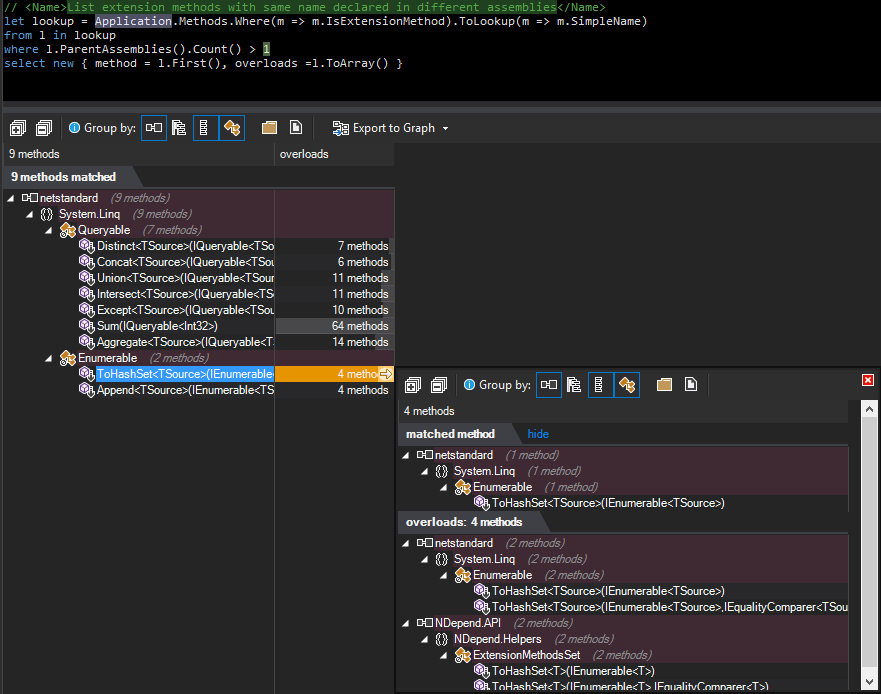 What makes a codebase acquirable?

This is the rare question that affects software developers, managers, and executives in a surprisingly similar way.  And that’s saying something since, by and large, people up and down the corporate pyramid don’t tend to share a lot of professional overlap.

END_OF_DOCUMENT_TOKEN_TO_BE_REPLACED

The .NET Framework has certainly been through many changes since it was introduced by Microsoft in 2002. Arguably, .NET Core is the biggest change. First, .NET Core is open source. Also, you can now build .NET applications that run on Windows, Linux, and Mac. Developers can choose which packages and frameworks to include in their applications, different from the .NET Framework’s all-or-nothing methodology. .NET Core fundamentally changes how .NET developers write code. Now .NET Core 2.1 will add to the .NET revolution happening right now.

Writing software is always easier when you can quickly execute code in order to test it and get fast feedback. Microsoft understands this and certainly has heard that .NET Core’s build times could be improved. That is exactly what Microsoft has done. 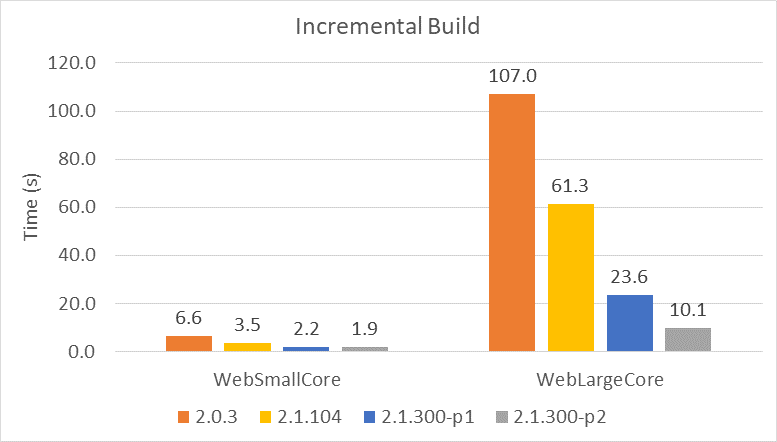 This performance increase helps with development speeds as well as build speeds by using automated build tools, such as MSBuild. Large projects especially should see a dramatic increase in the speed of building your application.

Even though .NET Core 2.1 is an incremental update, it packs many good features that make it worthwhile to try out.

A big piece of .NET Core 2.1 is the introduction of the new Span<T> type. This type allows you to view pieces of memory and use them without copying what is in the memory. How do you pass the first 1,000 elements of a 10,000 element array? If you’re using 2.0, you have to copy those elements into a new array and then pass the new array into the method. As arrays get larger, this operation becomes a major hit on performance.

The Span<T> type allows you to view and access a certain piece of an array (and other blocks of memory) without copying it. Think of it as a drive-thru window. Instead of going into the entire “store” to access the array elements required, a method can simply drive past the “window” and receive what it needs to do its job.

A really useful feature of the Span<T> type is the slice method. Slice is the way you can create that “window” into an array. Let’s look at an example.

This is a simple example that highlights the basic uses of Span<T>. First, you can create a span from an existing array. You can then slice that span by telling the slice method where in the array to start and how far to go. Then you can use that sliced portion of the array as you see fit without any performance hits. You can check out this example here and here.

Sockets are the gateways into your server. They serve as the foundation for incoming and outgoing network communication between computers. Previous versions of .NET Core used native code (such as C) in order to implement sockets. Starting with .NET Core 2.1, sockets are created using a new managed (meaning built using C# itself) class.

There is a new class in town called SocketsHttpHandler. This class will provide access to sockets using .NET sockets and non-native sockets. This has several benefits like the following:

This does make the final executable quite large and has some other drawbacks. However, in the right situation, self-contained applications can be quite useful.

Let’s face it, you’ll rarely read a post written by me that doesn’t touch on security. My security geekdom can prove to be useful. .NET Core 2.1 has changed and added some important security features to remain compliant with a new version of .NET Standard just released.

The new CryptographicOperations class gives developers two powerful tools in order to increase the security of their applications: FixedTimeEquals and ZeroMemory.

FixedTimeEquals helps to prevent a subtle side-channel attack on login screens. An attacker may try to brute force your login page or try to guess a username and password. Some applications provide a subtle but dangerous clue that allows attackers to know how close they are to the right login information. An attacker will continually enter login credentials, waiting for the response to take a bit longer. That can be a clue that the username is correct but the password is wrong. Attackers use timing attacks to break in.

FixedTimeEquals ensures that any two inputs of the same length will always return in the same amount of time. Use this when doing any cryptographic verification, such as your login functionality, to help prevent timing attacks.

ZeroMemory is a memory-clearing routine that cannot be optimized away by the compiler. This may seem strange, but sometimes the compiler will “optimize” code that clears memory without later reading that memory by eliminating the clearing code. This is better for speed from a technical standpoint. However, this could lead to sensitive secrets, like if cryptographic keys are left in memory without you knowing it.

Some other cool secure features were added to .NET Core 2.1. First, elliptic-curve Diffie-Hellman (ECDH) is now available on .NET Core. It’s okay if you don’t know what that is. Just know that it is a really good public-key cryptographic algorithm that has great performance and is a great choice for mobile and IoT applications.

Some other improvements include expanding existing cryptographic APIs to work with the new span type, leading to a 15% performance increase for some algorithms. .NET Core 2.1 also has better support overall for the SHA-2 Hash Algorithm.

How to Get It

.NET Core 2.1 is incremental in number but big on delivery. The new Span<T> type has driven major performance improvements for the core libraries and will do the same for your application. New security features will help you write more secure code. And new tech is fun. So have fun and try out .NET Core 2.1.

“Null is evil.” If you’ve been a software developer for any reasonable length of time, I bet you’ve come across that statement several times.

I’d say it’s also very likely that you agree with the sentiment, i.e., that the null reference is a feature our programming languages would be better off without. Even its creator has expressed regret over the null reference, famously calling it his “billion-dollar mistake.”

Bashing poor old null tends to get old, so authors don’t do just that. They also offer alternatives. And while I do believe that many of the presented alternatives have their merits, I also think we may have overlooked the best solution for the whole thing.

In this post, we’re going to examine some of the common alternatives for returning null before making the argument that the best alternative is null itself. Let’s get started! END_OF_DOCUMENT_TOKEN_TO_BE_REPLACED