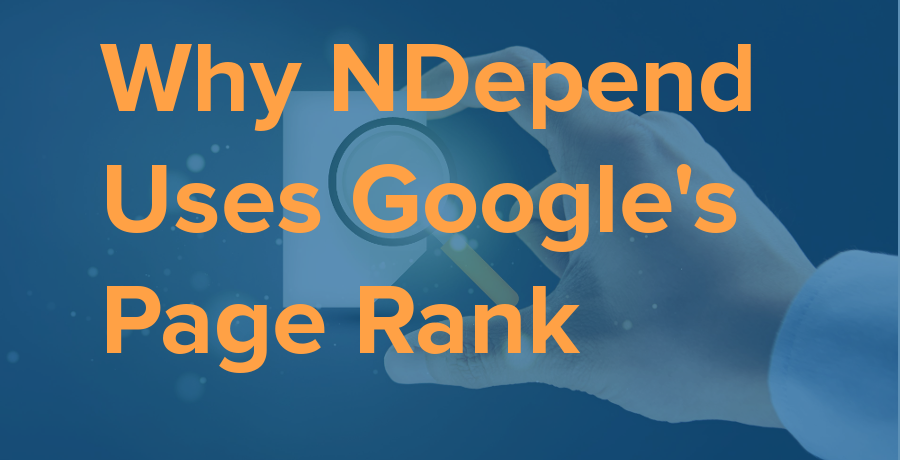 I remember my early days of blogging as sort of a comedy of errors.  Oh, don’t get me wrong.  I don’t think those early posts were terrible, since I’d always written a lot.  Rather, I knew very little about everything besides the writing.  For example, I initially thought link spammers were just somewhat daft blog commenters.  I stumbled through various mistakes and learned the art of blogging in fits and starts.  This included my discovery of something called page rank.

Page rank had a relatively involved calculation, but that didn’t interest me at the time.  Instead, I found myself dazzled by some gamification.  Sites like this one would take your domain and a captcha as input and spit out a score from 0 to 10 as output.  That simply, they turned my blogging world upside down.  I now had a score to chase and a means of comparing myself against others.  And I vaguely understood that getting more inbound links would increase my page rank score.

Of course, as an introvert, I struggle with outgoing self-promotion.  Cold outreach to people to see if they’d link to me never seriously occurred to me.  Instead, I reasoned that I would play the long game.  Write enough posts, and the shares start to come.  And then when the shares come, so too will the links.  So I watched my page rank inch slowly upward over time.

The Decline of Page Rank

My page rank ticked upward until one day it didn’t anymore.  Turns out, Google slowly killed it over the course of a number of years.  Ten months passed between its penultimate update and its final one.  So there I stood (metaphorically), waiting for a boost to my rank that would never come.

But why did Google kill page rank?  Wouldn’t such an easily digestible construct continue to help people?  Well, sort of.  Unfortunately, it disproportionately helped the wrong sort of people.

The Google founders developed the concept during their time at Stanford.  Conceptually, the page rank algorithm regards a link from site A to site B as a “vote” for site B, by site A.  But not all pages get to “vote” equally.  The higher a rank the page has, the more worthwhile its vote, creating a conceptual feedback loop.

On the surface, this sounds great, and, in many ways, it was.  As you can imagine, a site with a ton of inbound links, like a government study or a news outlet, would accumulate a great deal of rank.  Since employees would carefully curate such sites, you could put a lot of stock in a site to which they linked (and search engines did).  So in theory, you have a democratized system in which the sites best regarded by the public had the best rank.

But in this theory, no link spammers existed.  If you wanted good page rank, you could produce high quality, popular content.  Or you could pay some shady outfit to carpet bomb blog comment sections with links to your site.  Because of this fatal flaw, page rank eventually dwindled to obscurity.

A Useful Reappropriation of Page Rank

For clarity, understand that Google (probably) still uses some incarnation of this scheme.  But they no longer update the easily consumed public version of it.  They now use it as only one of many factors in what they display in response to searches.  The heyday of comparing page rank scores for sites has come and gone.  But that doesn’t mean we can’t use it elsewhere, and to great efficacy.

For instance, consider applying this to codebases.  Instead of a situation where website A links to website B, imagine a situation where type A refers directly to type B.  Now, imagine your codebase as a (hopefully acyclic) directed graph with edges and nodes.  You start to have an interesting vehicle for reasoning about your codebase.

What would a high rank mean in this context?  Well, relatively high rank for a type would mean that other types tended to refer to it at a high rate.  Types with relatively low (or zero) rank would take no dependencies, existing at the edge of your code.  And the types with the highest rank?  These would be types used by other types with high rank.

END_OF_DOCUMENT_TOKEN_TO_BE_REPLACED 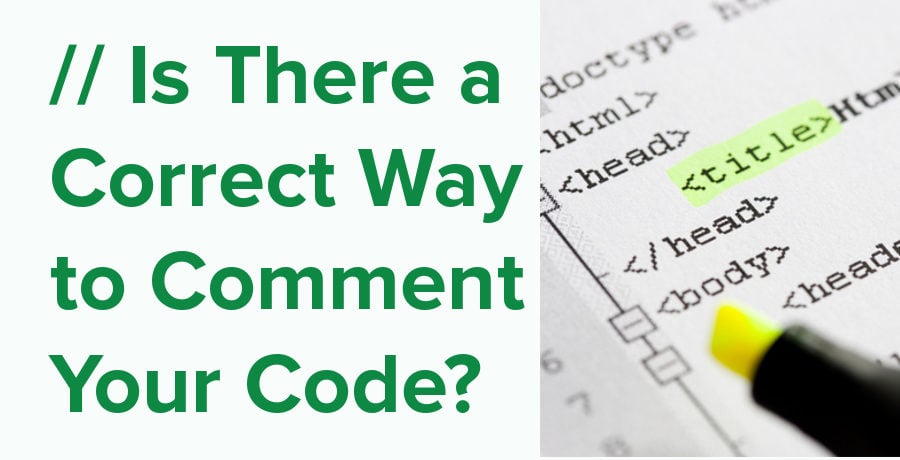 Given that I both consult and do a number of public things (like blogging), I field a lot of questions.  As a result, the subject of code comments comes up from time to time.  I’ll offer my take on the correct way to comment code.  But remember that I am a consultant, so I always have a knee-jerk response to say that it depends.

Before we get to my take, though, let’s go watch programmers do what we love to do on subjects like this: argue angrily.  On the subject of comments, programmers seem to fall roughly into two camps.  These include the “clean code needs no comments” camp and the “professionalism means commenting” camp.  To wit:

And then, on the other side:

If you’re seriously questioning the value of writing comments, then I’d have to include you in the group of “junior programmers,” too.  Comments are absolutely crucial.

Thins would probably go downhill from there fast, except that people curate Stack Overflow against overt squabbling.

Splitting the Difference on Commenting

Whenever two sides entrench on a matter, diplomats of the community seek to find common ground.  When it comes to code comments, this generally takes the form of adages about expressing the why in comments.  For example, consider this pithy rule of thumb from the Stack Overflow thread.

Great programmers tell you why a particular implementation was chosen.

Master programmers tell you why other implementations were not chosen.

Jeff Atwood has addressed this subject a few different times.

When you’ve rewritten, refactored, and rearchitected your code a dozen times to make it easy for your fellow developers to read and understand — when you can’t possibly imagine any conceivable way your code could be changed to become more straightforward and obvious — then, and only then, should you feel compelled to add a comment explaining what your code does.

And so, as with any middle ground compromise, both entrenched sides have something to like (and hate).  Thus, you might say that whatever consensus exists among programmers, it leans toward a “correct way” that involves commenting about why.

END_OF_DOCUMENT_TOKEN_TO_BE_REPLACED 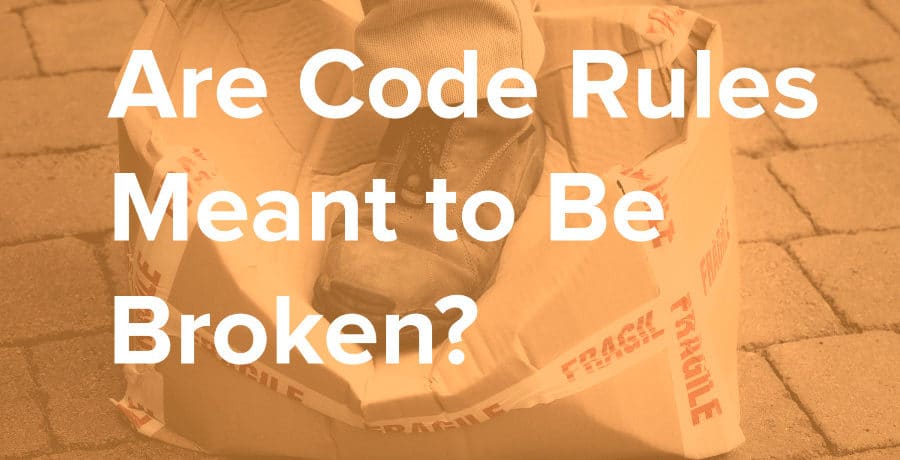 If you’ve never seen the movie Footloose, I can’t honestly say I recommend it.  If your tastes run similarly to mine, you’ll find it somewhat over the top.

A boy from the big city moves to a quiet country town.  Once there, he finds that the town council, filled with local curmudgeons, has outlawed rock music and dancing.  So follows a predictable sequence of events as the boy tries to win his new town over and to convince them of the importance of free expression.  You can probably hear his voice saying, “come on, Mr. Uptighterton, rules are made to be broken!”

Today, I’d like to explore a bit the theme of rules and breaking them.  But I’ll move it from a boy teaching the people from American Gothic to dance and into the software development shop and to rules around a codebase.

Perhaps you’ve experienced something similarly, comically oppressive in your travels.  A power mad architect with a crazy inheritance framework.  A team lead that lectures endlessly about the finer points of Hungarian notation.  Maybe you’ve wanted to grab your fellow team members by the shirt collars, shake them, and shout, “go on, leave the trailing underscore off the class field name!”

If so, then I sympathize and empathize.  Soul crushing shops do exist, seeking to break the spirits of all working there.  In such places, rule breaking might help if only to shake people out of learned helplessness and depression.  But I’m going to examine some relatively normal situations and explore the role of rules for a software team.

END_OF_DOCUMENT_TOKEN_TO_BE_REPLACED

Committing code involves, in a dramatic sense, two universes colliding.  Firstly, you have the universe of your own work and metaphorical workbench.  You’ve worked for some amount of time on your code, hopefully in a state of flow.  And secondly, you have the universe of the team’s communal work product.  And so when you commit, you force these universes together by foisting your recent work on the team.

In bygone years, this created far more heartburn for the average team than it does today.  Barbaric as it may seem, I can actually remember a time when some professional software developers didn’t use source control.  A “commit” thus involved literally overwriting a file on a shared drive, obliterating all trace of the previous version.  (Sometimes, you might create a backup copy of the folder).  Here, your universe actually kind of ate the team’s communal universe.

But, even in the earliest days of my career, lack of source control represented sloppy process.  I remember installing the practice in situations that lacked it.  But even with source control in place, people tended to go off and code in their own world for weeks or even months during feature development.  Only when release time neared did they start to have what the industry affectionately calls “merge parties,” wherein the team would spend days or weeks sorting out all of the instances where their changes trampled one another’s.

In the interceding years, the industry has learned the wisdom of continuous integration (CI).  CI builds on the premise, “if it hurts, do it more,” by encouraging frequent, lower stakes commits.  These days, most teams commit on the order of hours, rather than weeks or months.  This significantly lowers the onerousness of universes colliding.

But it doesn’t eliminate the problem altogether, even in teams that live the CI dream.  No matter how frequently you do it and how sophisticated the workflows around modern source control, you still have the basic problem of putting your stuff into the team’s universe.  And this comes with the metaphorical risk of leaving your tools laying around where someone can trip over them.

So today, let’s take a look at some of the most common things everyone forgets before committing code.  And, for the purposes of the post, I’ll remain source control agnostic, with the parlance “commit” meaning generally to sync your files with the team’s.